A series of summer events has seen leading artists, historians and researchers come together to celebrate Japan’s rich cultural history and UCL’s varied connections with the country 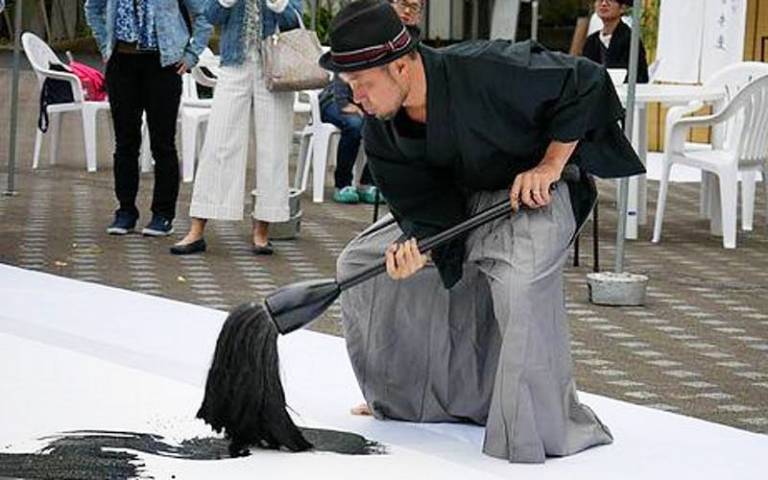 UCL has played host to a series of Japan-themed events including a film screening, calligraphy performance and Meiji Restoration anniversary event over the past week, in celebration of the university’s current and historical connections with the country.

The events formed part of the UCL-Japan Youth Challenge, an annual summer school programme for pre-university students from the UK and Japan. The Challenge was launched in 2015 to increase awareness of the global Grand Challenges and develop students’ communication skills.

On 31 July, students, staff and summer school participants came together for a celebration of the 150th anniversary of the Meiji Restoration (Meiji-ishin).

One of Japan’s most significant historical turning points, the Meiji Restoration is widely acknowledged to have lain the foundations for modern Japan. Famous UCL alumni from Japan, the so-called Choshu Five and Satsuma 19, made significant contributions to the movement.

As part of the event, Professor Andrew Cobbing, associate professor at the University of Nottingham and a world expert in 19th century Japanese history, along with Lesley Downer, a writer, historian and author who has been writing about Japan since the 1970s, provided guest lectures. High school students from the Kagoshima prefecture then presented about the history and future of their hometown.

On 2 August, in the second event of the series, ‘Japanese artists in London’, four leading cultural figures took part in a panel discussion focused on Japanese culture and how to excel in a creative career.

The panel included calligraphy artist Kamari Maeda, who seeks to conserve calligraphy as a traditional Japanese art form while modernising its practice, along with Junichi Kajioka, an award-winning Japanese writer, actor and director. His latest film Sugihara Survivors: Jewish and Japanese, Past and Future has won numerous international awards, including Best Short Documentary at the Nice Film Festival.

Joining them in passing on their creative advice was award-winning violinist Lisa Ueda and Yoshinori Ishii – Executive Chef at UMU Restaurant, and the recipient of two Michelin Stars and three AA Rosettes.

“I want future generations to inherit Japanese culture, and I want to spread the culture globally too,” said Kamari.

Lisa echoed this sentiment. She explained: “I’m very passionate about strengthening UK and Japanese relations. I performed in front of the International Olympic Committee in 2012, so I like to feel a contributed a tiny bit to Tokyo 2020!”

The discussion was followed by a screening of the Sugihara Survivors documentary, the story of Chiune Sugihara, the Japanese Vice-consul to Lithuania during WWII, who issued 2,139 transit visas to Jewish people against his government’s orders, thereby saving around 6,000 lives from Nazi persecution.

“Through my filmmaking, I aim to bring English and Japanese cultures together”, Junichi explained. 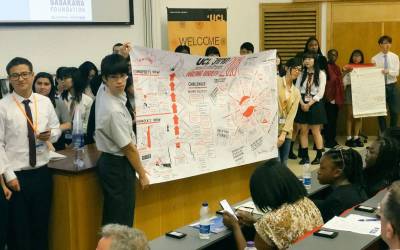 In collaboration with Osaka University, on 3 August, the UCL-Japan Youth Challenge hosted the final event of the series: ‘Our life in an ageing society - how the young generation solve problems associated with ageing’, a symposium focused on the problems presented by a globally ageing population.

With the world’s highest life expectancy, the need to address the issue is more pressing than ever in Japan. Japan and the UK are actively cooperating on finding solutions, and UCL researchers are among those working to combat the various issues it presents, as part of the Grand Challenges initiative.

This summer’s event series was organised by Professor Shin-Ichi Ohnuma, UCL’s Japan ambassador. In his role as ambassador, Shin-Ichi has organised a range of events. In 2013, he helped to organise celebrations involving various Japanese organisations to mark the 150th anniversary of UK-Japan academic collaboration.

Speaking earlier this year, following his recognition at the Japanese Embassy in London for his contribution to Japan-UK academic and educational relations, Shin-Ichi said: “UCL has an amazing history with Japan, which includes the Choshu-Five and Satsuma-19.

“But in my role as UCL’s Japan ambassador and through active interaction with Japanese universities, high schools, and industries, I want to increase the status of UCL in Japan, improving recognition and the number of Japanese students studying here.”