Dr Yuwei Xu (formerly IOE, UCL's Faculty of Education and Society), used Global Engagement Funds to compare experiences and understanding of the Covid-19 pandemic among children in China and England. 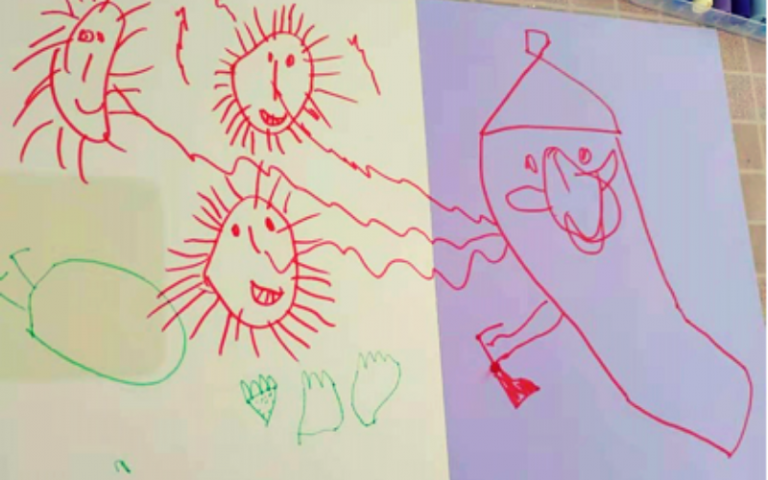 There is a common understanding across the world that the Covid-19 pandemic has had an impact on children. Their routines have altered, and what they have been allowed to do has changed as different restrictions have been imposed and lifted. Significantly, parents and caregivers have had to explain the pandemic in a way they think children will understand. As this is the first time many children and adults have experienced a pandemic, there is a sense that we simply don’t know how children have perceived and processed this experience.

To understand this more closely, UCL collaborated with Zhejiang University in China between April and June 2021, to interview children in China and England to gain insights into their perspectives. In order to reach the children, the team produced a handbook for parents to explain the study, and met with them on video calls to discuss the research further. The parents then asked their children to take photographs or draw pictures about Covid-19 and what they did during the lockdowns in 2020. The parents also discussed these images with their children, guided by the handbook and conversations with the research team.

“We developed this project because we realised most other research in this field focused on how Covid-19 was affecting children’s mental health,” said Yuwei. “They were being regarded as passive recipients of this impact. We wanted to look at how children actively interact with the idea of Covid-19 as independent individuals.”

The project involved the participation of 11 children from China and 13 children from England, aged between four and 11. All of them decided to draw pictures instead of taking photos. They were asked to draw one picture that was about coronavirus, and one about what they did during the lockdowns in 2020.

The team found that all children actively interacted with the questions posed. They each had their own ideas about what those topics meant to them; a clear demonstration of child agency amid the pandemic. Since this was a comparative study between China and England, the team was especially interested in how the children’s participation linked to the broader social, cultural and political context.

The pictures drawn by the children in China included a common theme that related to the idea of beating the monsters. “The messaging being actively promoted by the Chinese government was about the virus being a bad guy,” Yuwei explains. “The idea is that we are kind and good people, so we can always beat those monsters. So a lot of the children drew the virus as a kind of monster, with slogans saying things like ‘we will be able to beat them’.” One child in China also drew a large bottle of milk, next to a small monster that represented coronavirus. The accompanying caption translates as: ‘If we drink a lot of milk, we will be able to beat the monster.’

In England, much of the messaging from the government related to the idea of staying safe. Reflecting this, the children in England drew a lot of pictures that incorporated ideas of safety.

There were also commonalities between what children in both countries experienced as being noteworthy during the lockdowns, particularly in terms of social relationships. Children from China and England explained how it was difficult to meet their friends and grandparents because of restrictions imposed due to the pandemic. Most children also made reference to the increased participation of their fathers in daily life. “This was valued by some of the Chinese children in particular,” said Yuwei. “We still have a lot of those gendered roles in China, with fathers as the breadwinners and mothers as domestic carers. A lot of the drawings by Chinese children reflected their ability to spend more time with their fathers.”

Another area of particular interest to the research team was the parent reflections on the process. They appreciated the opportunity to discuss Covid-19 with their children, and were often pleasantly surprised by their child’s response to the topic. “Many parents thought of their children as being vulnerable and they were worried about their mental health as a result of Covid-19,” explained Yuwei. “But through this drawing activity, parents realised how capable and independent their children are. It challenged some traditional understandings between parents and children, and they expressed a sense of pride and relief that their children were coping well. Knowing their children were not too impacted by the pandemic helped with their own mental health too.”

As a result of this project, the team is producing two journal articles – one on the children’s perspectives and one on the parental perspectives. They presented their initial findings at the European Early Childhood Education Research Association Conference in August 2021, and at the Leeds Trinity University Global Covid-19 Summit in March 2022. They are also editing a special issue for the peer-reviewed Children & Society journal, which is due to be published in December 2022.

Recognising that they were unable to reach families from less privileged backgrounds in this study, the team has been awarded further funds from Brunel University to do another project to explore engaging with Chinese and British families from disadvantaged backgrounds.

“The funds that enabled this initial project also inspired new ideas for future collaborations between the two universities and beyond,” said Yuwei. “Understanding more about the experience of children during a pandemic will have a long-term impact when we face similar health crises in the future.”