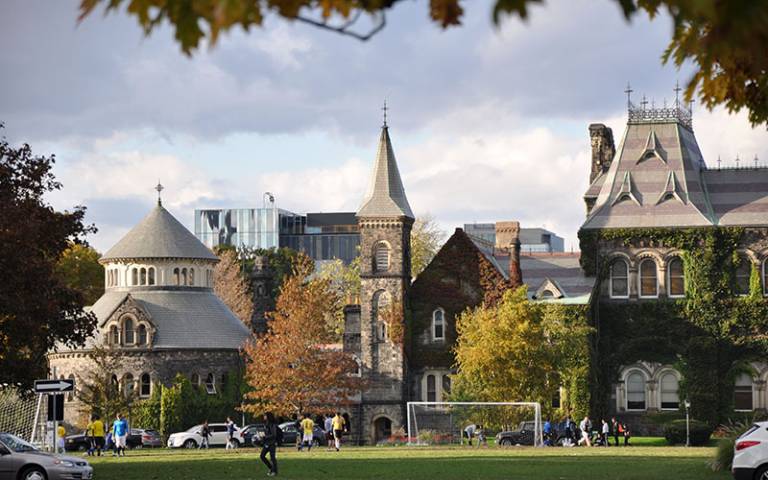 In 2017, Dr Abi Fisher (UCL Institute of Epidemiology and Health Care) was one of seven project leaders to receive funding through the UCL-Toronto Strategic Partner Funds. This joint seed-funding scheme has been designed to encourage academic collaboration between the two institutions in areas such as child health, neuroscience and education.

Dr Fisher is working with the University of Toronto’s Professor Catherine Sabiston (Kinesiology & Physical Education) on the ‘Team-up’ collaboration: a multi-country approach to developing and testing interventions aimed at improving the health behaviours of teenage and young adult (TYA) survivors of cancer in the UK and Canada.

Discussing the project, Dr Fisher said: “There is emerging evidence that a healthy lifestyle - sufficient physical activity, a healthy diet, not smoking and limiting alcohol - can improve a number of outcomes after a cancer diagnosis.

“Regarding physical activity, until fairly recently, the perception even in the medical profession was that rest was best. But we actually know now that that isn’t the case and there's evidence, particularly in adults, but now emerging in teenagers, that being physically active after a cancer diagnosis can improve things like fatigue and quality of life.”

Historically, most of the work in this area has focused on adults with solid tumours – predominantly breast, prostate and colorectal cancer. Dr Fisher and the team realised that there was a gap in research for the teenage and young adult bracket, which in the UK is ages 13 to 24, and in Canada is 13 to 39.

Dr Fisher explained that differences in the UK and Canadian healthcare systems – including these varying age brackets – have been an interesting facet of their project work with Toronto.

Dr Fisher has been working on the project with her previous PhD student Gemma Pugh, who was awarded a postdoctoral fellowship to continue this work with Dr Fisher and has since secured a lectureship at Queen Mary University.

Gemma’s PhD formed part of the project’s development work. This initial work took the form of what Dr Fisher described as “scoping the literature, interviewing and surveying oncology professionals and AYA patients to understand what advice they would like, in what format and when in the cancer care pathway they’d like this to be delivered. We used this information to develop preliminary resources ready for testing.

Explaining why they connected with academics at Toronto, Dr Fisher said: “Although cancer has a major impact on the teenage and young adult population, the number of new diagnoses is relatively small compared to other cancers – we have about 2,000 new diagnoses per year in the UK.

So if you're trying to ultimately develop and then test an intervention in a randomised control trial, it’s very difficult to get adequate numbers of patients, which is why you need international collaborations.”

She added: “We and Toronto are among a very small number of research groups worldwide who are exploring lifestyle intervention for TYA cancer patients, so it made sense to collaborate. We’re using the seed funding as a platform to establish our collaboration, then we hope other research groups may wish to join us.”

Toronto’s Professor Sabiston was conducting similar work with her own PhD student, Anika Petrella, and made initial contact with Dr Fisher. The two teams then aimed to develop resources together. They worked across countries and alongside healthcare professionals to look at the similarities and differences in the cancer care pathway, to see if they could develop a framework for international use.

Dr Fisher said: “Until relatively recently the research focus was on getting these patients to survive, and only lately evidence has started to emerge that lifestyle after a diagnosis, when around 85% of patients will survive, might help manage treatment toxicity and help patients self-manage.”

“What we’re trying to do at the moment is identify where the gaps are and what kind of training resources healthcare professionals would need to feel confident enough to be able to deliver the intervention in practice.”

The team’s project work has involved regular Skype calls and reciprocal visits. “Catherine and Anika came [to UCL] in March last year and spent a week here and in that time, they had a tour of our clinical facilities at the MacMillan Cancer Centre and spoke to oncologists there, to really get a feel for what the clinical pathway is like for patients here.

“Then we spent a lot of time brainstorming and sharing resources. They looked at some of the materials that we had developed to see whether they could then use any of them with their patients [in Toronto]. Anika took some of Gemma’s survey development work to try and identify patient needs and is now rolling [the findings] out with patients over there.”

“Anika then applied for a Canadian Mitacs Globalink Research Award to support her coming and working with our group for a three month fellowship and is here from April to June 2019 to further develop our collaboration.”

The team surveys conducted on UK teenagers suggest that they have low levels of physical activity, particularly on treatment, quite high levels of binge drinking, low levels of smoking but poor diets.

“Because the health issues are exacerbated by their treatment, they're a group who we really need to support in not doing that and focusing on physical activity,” said Dr Fisher. “So, we’d be interested to see, is the picture as bad in Canada as it is here, which we hypothesise it probably is.”

The team have been discussing the provision of training for more junior members of the group, as well as the potential to establish an ongoing exchange programme between UCL and Toronto.

Discussing next steps for the project, Dr Fisher said: “We’re going to Canada in September: there's a conference call for the International Psychosocial Oncology Society and we’re proposing to submit a symposium to say this is the collaboration that we've established; we’re looking for other people to join our collaborative efforts.”