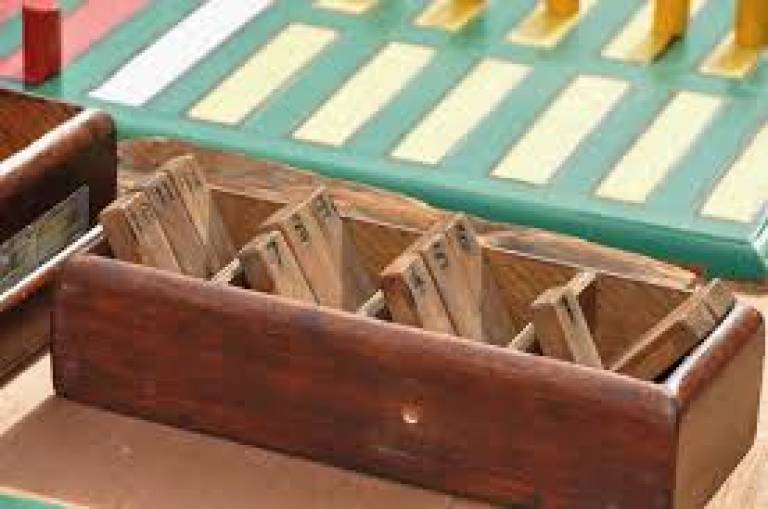 This Lunch Hour Lecture is organised in collaboration with UCL East.

Book Now
About the Lecture
How do the games children play resemble, recall or depart from the games of their parents and grandparents? How can memories of the play of previous generations be made tangible through immersive media, in museums and playgrounds? This lecture draws on an EPSRC-funded project in which archives of play from 20,000 children of the 1950s and 60s at the Bodleian Library and British Library are revoiced by today's children for an interactive installation at the V&A Museum of Childhood. Led by the UCL Institute of Education, in partnership with CASA at the Bartlett and the University of Sheffield, this project promotes inter-generational dialogue about play, and finds new connections between traditional and media-based games.

About Culture Lab
Using objects and archive materials, as well contemporary materials, Culture Lab at UCL East will comprise of practice-based spaces dedicated to debate and engagement around key questions of future living. It will address contemporary global concerns such as climate change, migration and inequality, as well as preparing young people, particularly those underrepresented in the cultural sector, for higher education and a working life in the cultural industries.

About UCL East
UCL East is the largest ever single expansion of UCL since we were founded nearly 200 years ago.
UCL East will be a world-class campus on Queen Elizabeth Olympic Park, bringing together researchers, students, communities and partners to collaborate on solutions to the biggest, and most fundamental, challenges facing humanity – both today and in the future.
Watch the Live Stream

Professor of English, Media and Drama at Institute of Education

Andrew Burn is Professor of English, Media and Drama at the Institute of Education, and director of the DARE centre (Digital | Arts | Research | Education), a research collaboration with the British Film Institute. He is also director of MAGiCAL projects, an enterprise developing game-based software for education, in particular the game-authoring tool Missionmaker which features in several of his research projects. Andrew has published work on many aspects of the media, including media literacy in schools, the semiotics of the moving image and computer games, and young people's production of digital animation, film and computer games. He has conducted a wide range of research project over many years, funded by, among others, the AHRC, the European Commission, the ESRC and the EPSRC. Andrew is interested in the study of popular culture, especially as it relates to play, the arts and education. Methodologically, he has adapted theories of multimodality to describe and analyse media texts, relating them to them to the Cultural Studies research tradition.