Our Theatre Projects, coordinated and directed by Dr Marta Niccolai (Italian Studies), was inaugurated in the academic year 2018-2019. Its aims and objectives are to provide a new pathway for student-staff public engagement and student-staff-led activities, and to establish a more direct correlation between our academic and our creative practice within the School. This unique opportunity demands commitment and delivers unforgettable moments to take home.

This project aims to provide students with an opportunity to engage, not just academically, but experientially with a written text, and to participate in the joint process of bringing a source text to life through the production of a public performance.

The aim is for students to engage closely and interactively with source texts in order to reflect on the way that central themes in these plays are developed and continue to impact on contemporary society.

The intention is to heighten students’ awareness of the practical and intercultural aspects of theatrical performance through performative interpretations of the source texts.

To bring students and staff together to perform with external speakers and engage successfully with members of the public.

Whilst the aims and objectives remain the same every year, the unique make-up of each theatre group take participants onto new, creative and stimulating adventures.

The projects are sponsored by the Head of School and financially supported by the Dean of Faculty, Dr Stella Bruzzi, with the Dean’s fund, and the occasional contribution from cultural organisations.

For the following roles passion and commitment are key requirements. You also need to have a group spirit and be able to attend weekly rehearsals. Please contact Dr Marta Niccolai via marta.niccolai@ucl.ac.uk for more information and to apply.

In our first year, we staged three performances at The Bloomsbury Studio. The three projects engaged a total of 30 students, most of them from the School, with a few keen students from EISPS and other faculties.

A 1914, one-act puppet play by the Austrian playwright Arthur Schnitzler (staged at The Bloomsbury Studio; 26th and 27th February 2019). The poster for the performance includes a second one-act play by Schnitzler, The Puppeteer (1914). See the gallery below. Unfortunately due to unforeseen circumstance this performance had to be cancelled.

Our theatre group presents two one-act plays by the Austrian dramatist Arthur Schnitzler: the Puppeteer and Gallant Cassian. Here the Viennese doctor uses the idea of the puppet to take his scalpel into coercive relationships and ask how far any of us is in control of our destiny. Published in the cycle Marionettes in 1906, the two plays construct unstable love triangles. While in the Puppeteer metaphorical puppets come to life, revealing the dark underpinning of an happy marriage, Gallant Cassian is explicitly a puppet play. Performed by puppet like human actors, its bittersweet love triangle lays bare some of the -potentially destructive – drives and impulses that all too often seem to be pulling our strings.
We perform both plays in English translation, presenting Gallant Cassian in a new version, created by our students. 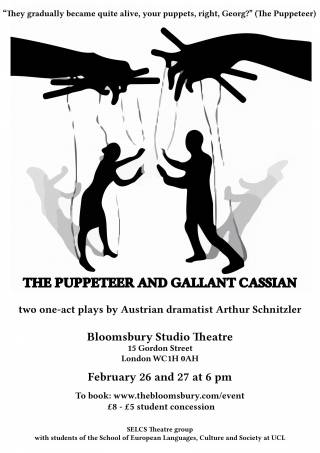 A 1917 play by the Italian playwright Luigi Pirandello (staged at The Bloomsbury Studio on 6th and 7th March 2019). See the gallery below.

In Right You Are, seven respectable, middle-class types in a comfortable, bourgeois home argue over their perceptions of a mysterious woman, the Signor Ponza’s wife, seen at the window of a nearby building. No one has ever seen Signor Ponza’s wife and her mother, Signora Frola, together. Councillor Agazzi, Ponza’s employer, investigates Ponza’s private life. Ponza claims that his wife is really his second wife, the first having died in an earthquake that destroyed all verifying documents. Too, his wife only pretends to be Signora Frola’s daughter to humour Signora Frola, who, he claims, is insane. Thoroughly bewildered, Agazzi demands to meet Ponza’s wife, who arrives, heavily veiled, proclaiming herself as both the daughter of Signora Frola and the second wife of Ponza. The “truth” of the matter remains a mystery. This work, like almost all of Pirandello’s plays, contrasts art and life, demonstrating that truth is subjective and relative. Presented by the students in a new modern, English version. 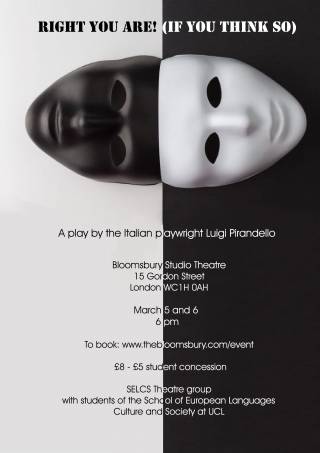 A 1959 play by the Romanian-French playwright Eugène Ionesco (staged at The Bloomsbury Studio on 26th and 27th March 2019). See the gallery below.

This is an absurdist play written by Eugene Ionesco in 1959. Over the course of three acts, the inhabitants of a small, provincial French town turn into rhinoceroses; ultimately the only human who does not succumb to this mass metamorphosis is the central character, Bérenger, a flustered everyman figure who is initially criticized in the play for his drinking, tardiness, and scruffy lifestyle and then, later, for his increasing paranoia and obsession with the rhinoceroses. The play explores the themes of conformity, culture, fascism, responsibility, logic, mass movements, philosophy and morality. The Students have been faithful to the plot, presented in English with a modern cut. 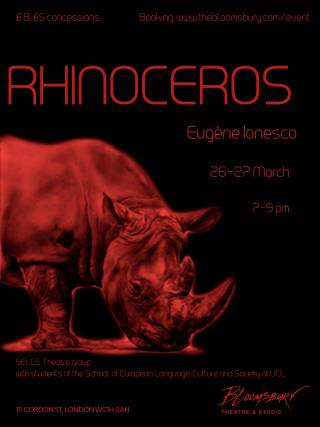 This UK premiere is based on a selection of 16 monologues found in ‘Ferite a morte’ (Wounded to Death) written by the author and TV presenter Serena Dandini, with Maura Misiti (2013) with and original monologue by Margot Antignac (SELCS UG). The stories draw from real events of domestic violence perpetrated all over the world. This multimedia performance presents an ironic yet gripping portrayal of domestic violence. A creative narration of real people’s stories that explores an issue still largely undervalued. Seventeen women from all over the world are brought back to life to tell of their relationship that led to their own death.  A background of music and artistic projections accompanies a dance of love and death and amplifies the women’s voices emerging from the monologues. This is a passionate celebration of women who were loved to death but reclaim their soul on stage. 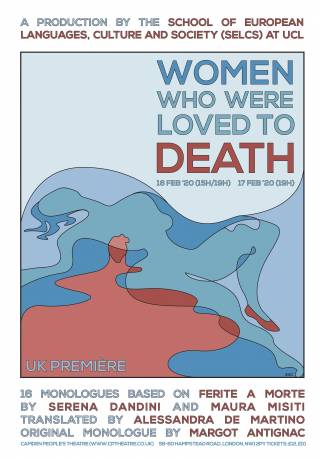 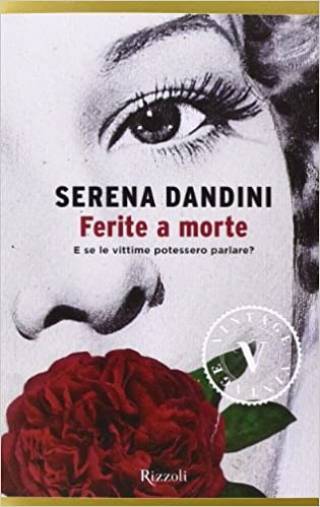 An online streamed adaptation of ‘Natura morta in un fosso’ (Still Life in Ditch’) by the Italian playwright Stefano Paradivino translated in English by Ilaria Papini in 2013 and published by Hanging Loose Press (New York). “a riveting murder mystery constructed entirely of vivid monologues. As the plot unfolds through the intricate interplay of voices, we are not only swept towards a powerhouse climax but even more impressively taken deep into the minds of a half-dozen living, breathing unforgettable characters." Harold Schechter in www.bookshop.org. The play, produced by the SELCS Theatre projects, has been performed by students from SELCS and across UCL. 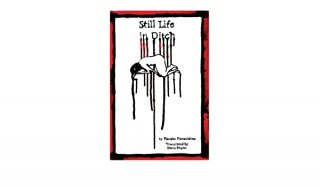 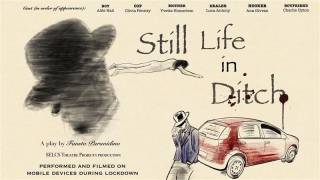 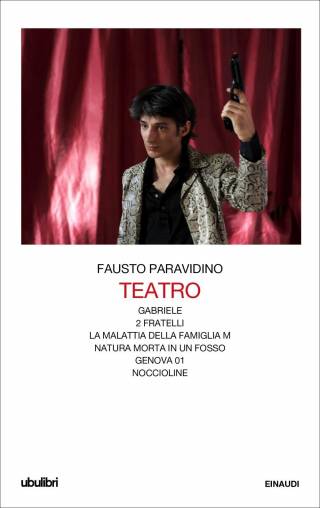 I played the role of Cop in Still Life in Ditch. Everyone involved was so lovely and supportive of each other's performances; there was absolutely no judgement which made me feel at ease the whole time. I always loved acting as a kid, but academic commitments got in the way as I got older. The project gave me an opportunity to rediscover my passion, for which I am so grateful. I will continue acting from now due to my amazing experience from this project." Olivia

“I played the role of Dealer [in Still Life in Ditch]. I loved being part of the project. It was a fantastic way to stay creative in lockdown and connect with other UCL students in this time. I loved developing my character on the zoom sessions with the rest of the group and felt like I grew as a performer." Cristian

I could observe and participate in the whole process of a theatrical production. It was great to solve the problems during the process with the team. Everybody was very talented and that made me realize what I can learn from them. Also, Marta and Lara have been very generous to give professional advice all the way through, which made me feel supported. Through this project, I became more confident about putting my artistic ideas into practice. I'm very grateful to the recognition of my work from the project team. I also gained some experience about how to be a media person and how to be involved in a theatrical production. This encouraged me to make more attempts to explore te theatre." Chen Yuan, promotion and poster designer for in Still Life in Ditch

A rewriting and staging of the original play by Federico Garcia Lorca (1934) performed at The Bloomsbury Studio on March 28-29, 2022. You can read the review of the play published in the magazine BioNews 1142.

The original play tells the story of Yerma, a woman in rural Spain who is desperate to have a child. Increasingly stressed by the fruitless passing of time and by the society around her, and her unfulfilled  motherhood leads her to kill her husband. Our multimedia production presents a contemporary, creative and independent woman, Yerma, who undertakes a complex journey to have a child. The use of projections and voice over narration give an insight into both her mind and the array of feelings as she comes to terms with being childless. Of the original play, we have kept the story line and the name of the main characters – Yerma, Victor and Juan – We have also borrowed some poetic lines in order to connect with the captivating pagan and rural Spanish setting and pathos. Our adaptation takes lines also from the autobiographical book ‘The Pursuit of Motherhood’ (2014) by Jessica Hepburn. Her journey into fertility treatments has been a great source of inspiration for the characterisation of Yerma. We have decided that today, Yerma would not be associated with the same tragic fate of her predecessor. We hope otherwise to have provided this play with the pathos and trepidation inherent in the complexity of a woman’s journey to have a child. 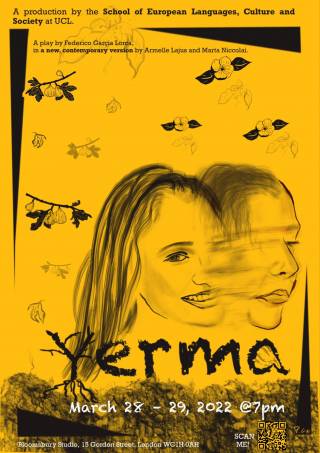 An interdisciplinary event celebrating the king of clown, Joseph Grimaldi.

The figure of the clown seems to be more prominent than ever before in popular culture. Traditionally, the clown is associated with laughter, the relief of pain and sadness, sometimes even described as a modern healer, or shaman. In more recent times, the clown has become a controversial figure, associated with more negative qualities such as horror  films like ‘It’ (Andrés Muschietti) and the boisterous behaviour of certain politician, who are accused of ‘clowning around’.  Yet, the clown is a complex figure that deserves closer study. An excellent starting point would be a once popular yet now overlooked figure from British culture: Joseph Grimaldi (1778-1837), a London born comedian with Italian roots, also known as ‘the king of clowns’. Grimaldi defined what we now understand to be the clown, becoming the most popular entertainer of the Regency period. He made his stage debut at the Theatre Royal, Drury Lane, and performed for many years at Sadler’s Wells, as well as Covent Garden theatres.

Recordings of this theatre project are available to watch on the following links:

Watch - The Clown in Popular Culture: The Clown between tradition and innovation

This is an interdisciplinary event, including academic approaches to contemporary clowns – practitioners view – a performance as detailed from the programme avaialble below: 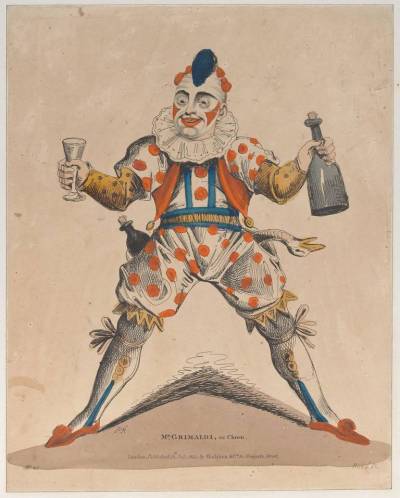