The UCL School of European Languages, Culture and Society (SELCS) was formed in 2010 as a merger of six language departments that look back on a long and distinguished history.

Establishing subjects not previously taught in English universities had been one of UCL’s most notable innovations when it was founded in 1826 as a radical counter-institution to Oxford and Cambridge, with Modern Foreign Languages standing out in particular. 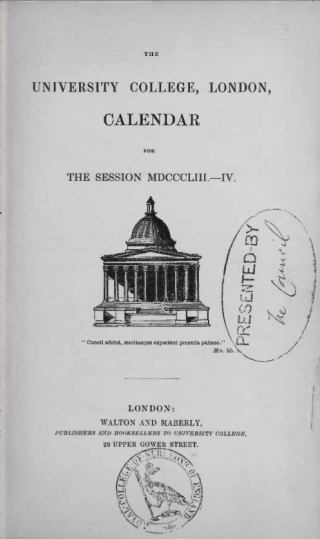 Chairs in German, Italian and Spanish were established at the outset and French offered as well by P. F. Merlet, who was promoted to a full professorship a few years after, in 1836. Most strikingly, UCL’s modern languages were taught by refugees from their respective countries, German originally by Ludwig von Mühlenfels, a progressive and independent thinker, who having escaped from a political prison in Prussia, was appointed while passing through London on his way to join a band of fellow exiles in Mexico. Italian was put into the hands of Antonio (Anthony) Panizzi, who had escaped from a death sentence in the Duchy of Modena, present-day Italy. Besides his post in the College, Panizzi took that of Assistant Librarian at the British Museum in 1831, becoming Keeper of Printed Books there in 1837 and eventually Principal Librarian in 1856. After giving up his Chair, he achieved permanent fame as creator of both the Library Catalogue and the Reading Room at the British Museum, since split off to become the British Library. Spanish was handled by Antonio Alcalá Galiano, a leading figure in Spanish Romantic literature and a marked man in Spain after 1832 when he moved a resolution against Ferdinand VII in the Spanish parliament and as a result was sentenced to death.

At the end of World War I, Scandinavian (1917) and Dutch Studies (1919) were introduced into the curriculum – again the first such programmes in the Anglophone world –, with the Scottish essayist and literary scholar William Paton Ker and the later famous historian Pieter Geyl, one of the most influential thinkers on history of all time, as first incumbents. Today, SELCS is one of only two universities in the UK offering undergraduate and postgraduate degrees in these less-widely taught languages. The spectrum of languages taught was further expanded in 2014, when Portuguese was added to our programme in Iberian and Latin American Studies. Together with our friends and colleagues in the School of Slavonic and Eastern European Studies (SSEES), also founded in the wake of World War I, and in the departments of Greek and Latin and Hebrew and Jewish Studies, part of UCL since its beginnings, we offer one of largest ranges of modern languages in the UK and the Anglophone world – and together with the School of Oriental and African Studies (SOAS) across the road, an independent but sister institution within the University of London, Bloomsbury certainly can lay claim to being the world capital of modern languages in Higher Education.

As part of our Centre for Multidisciplinary and Intercultural Inquiry (CMII), we have also systematically built up postgraduate degrees in Comparative Literature, European Studies, Early Modern Studies, Film Studies, Health Humanities, Gender Studies and Translation Studies as cross-cutting programmes across language departments, the latter of which received a momentous boost when in 2013 the Centre of Translation Studies (CenTras) joined our ranks, having formerly been affiliated with Imperial College. As part of these programmes we have also acquired significant research expertise in non-European languages, with particular strengths in African, Arabic and Chinese Studies.