With colleagues from across UCL, we have designed a new strand for the UCL Global Citizenship Summer School.

The summer school has been developed as a strand for the UCL Global Citizenship Programme, which brings together undergraduate and postgraduate students from across UCL to explore the biggest global challenges. Taking place each year during Term 3, usually throughout May and June, this two-week programme is a wonderful opportunity to investigate real issues and how they could be addressed, through research and your actions as a citizen. The programme is free to join and offers participants the chance to meet new people from other disciplines, hear new ideas, broaden their academic experience and learn new skills.

Europe is a continent that defies easy categorisation. Shifting borders; competing ideologies and visions of political community; languages, cultures and faiths that unite and divide in equal measure. Even in the relative stability of the last 50 years, Europe remains a contemporary challenge.

This new strand explores Europe in its many guises, including the European Union but looking beyond it as well.  It allows students to explore Europe's cultural and linguistic diversity hands on, through film, ethnography, and writing, and learning about a new, 'rare' language. Students conduct their own research with London's varied communities to understand the challenges faced across the continent. In addition, they receive tuition in one of eight European languages. Through such close engagement with people, language, and society, the Challenging Europe strand demonstrates the values of Global Citizenship that are needed in an ever more connected world.

"Engaging and thought-provoking content, and a great opportunity to learn a new language for free."

What skills do students develop?

Film-making, film-editing, and poster design Language skills in one of eight European languages (from sounds and simple structures to more complex topics such as texts and cultural representation in language) Ethnographic interview and fieldwork techniques Critical thinking and analytical skills Dealing with empathy and serendipity in interdisciplinary research Engaging and thought-provoking content, and a great opp

Students get to grips with Europe across a variety of perspectives, from history to politics, faith to migration.

They develop an understanding of a huge range of subjects, including the history of political ideas particular to Europe and the European Union, the linguistic landscape of the region, migration along Roman roads and Mediterranean seaways, Viennese theatres in Odessa, Muslim populations now and hundreds of years ago, Turkish travellers, Gypsy settlements, and Jewish townships.

In the first week, they take part in sessions on film-making, portrait photography, and fieldwork techniques. And then they put these skills to use by:

creating a documentary film about a member of the European community in London; reflecting on Europe and global citizenship through blog entries; curating a portrait exhibition to tell the story of migrants' arrivals in London.

What do students do?

They gain an understanding of how language relates to identity and personality on an individual level, and what it has to do with other cultural practices such as religion and politics.

They end up reading a piece of literature in their chosen language after just eight taught hours!

The work of the students is collected in an online blog. It shows how they explored and challenged what makes the idea of Europe, through mapping experiences of migration and movement in London. The students engage with European Londoners, who have come from other parts of Europe to make London their home, and who will be the subjects of the students' documentary films and portrait photography. Click on the image below to visit the website for an overview of how the students unpacked how we can think of and, understand Europe through its cultural, religious and linguistic heritage. 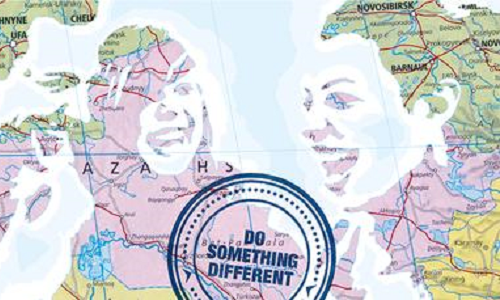