Our short film exploring music, poetry, and our engagement with both. 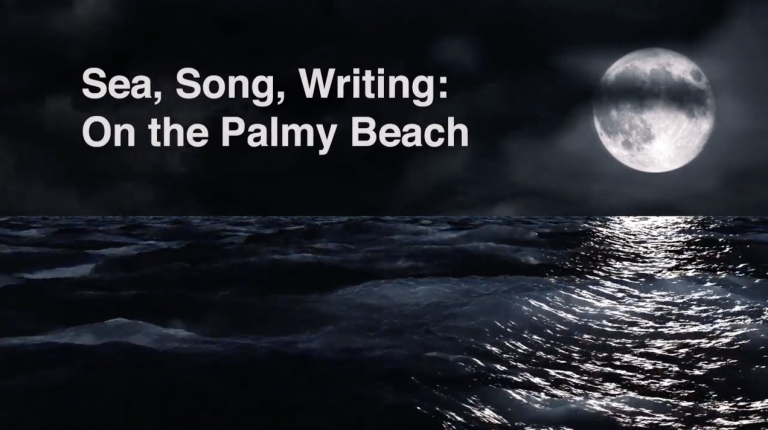 At the heart of this 15min film is song cycle On the Palmy Beach, written by British composer and first female Master of the Queen's Music, Judith Weir. The piece premiered in October 2019, commissioned by Kings Place for Ruby Hughes (soprano), Natalie Clein (cello) and Julius Drake (piano). A recording of their performance at Temple Music last year is available here.

On the Palmy Beach brings together four poems about life in the sea and on the beach. ‘Fabliau of Florida’ (Wallace Stevens) is a complex sea view with powerful, ever-changing textures. ‘The Glass-hulled Boat’ (Kathleen Jamie) reveals a phantasmagorical jellyfish, represented musically by the cello. ‘Basking Shark’ (Norman McCaig) relates another personal encounter with a sea-creature, provoking reflections about pre-history and evolution. ‘I started Early – Took my Dog’ (Emily Dickinson) is a gripping account of the waves on a beach, and their almost sexual pursuit of the poet (who, it is thought, never actually saw the sea in her lifetime.) If you want to read the poems, you’ll find them here.

In the film we explore how music can engage with poetry, and how we encounter it either as musicians or listeners. How might this encounter change the way we perceive both music and poetry – and how we experience oceans, seascapes and our place in the natural world?

The film was made by Graham Riach (Oxford), with Claudia Sternberg and Uta Staiger (both UCL EI). In addition to the musicians named above, it features commentary by artist Susan Collins (UCL Slade School of Art) and UCL literature scholars Jennifer Rushworth and Annika Lindskog. Thank you to Temple Music for providing the recording of the performance.

Composer Judith Weir was originally an oboe player, performing with the National Youth Orchestra of Britain. After studying composition at Cambridge University and Tanglewood, she composed a series of operas, including King Harald’s Saga, The Black Spider, and A Night at the Chinese Opera, which have been performed widely in the UK, Germany, Austria, Belgium, the Netherlands, and the USA. She also created several opera films. In the 1990s, Weir was resident composer with the City of Birmingham Symphony Orchestra, and has been commissioned by international bodies including the Boston Symphony Orchestra and London Sinfonietta. Recently, Weir’s composition repertoire has focused on choral music, and she was associate composer with the BBC Singers from 2015-19. In 2014, Weir was appointed Master of the Queen’s Music, a 395-year-old royal post in which she has written music for historic occasions including the Queen’s 90th birthday celebrations. She has been awarded both a CBE and The Queen’s Medal for Music.

Pianist Julius Drake is an internationally acclaimed instrumentalist who performs regularly both solo and in collaboration with leading musicians, including a longstanding performance partnership with Ruby Hughes. His most recent tour included recitals in Amsterdam, London, Philadelphia, Vienna, Hamburg, New York, and beyond. Drake appears regularly at major music centres and festivals, including the BBC Proms, Carnegie Hall, and La Scala. The former Director of the Perth International Chamber Music Festival (2000-2003) and Artist Director of the Leeds Lieder Festival (2009), he is now the Artistic Director of the Machynleth Festival in Wales since 2009. Drake holds a Professorship at Graz University for Music and the Performing Arts in Austria, teaches at the Guildhall School of Music in London, and is an Honorary member of the Royal Academy of Music.

Cellist Natalie Clein has been an internationally-recognised name since her teenage years, winning the BBC Young Musician of the Year in 1994 and becoming the first British winner of the Eurovision Competition for Young Musicians. She regularly performs and collaborates with composers and musicians around the world, and recently completed 4 years as Artist in Residence and Director of Musical Performance at Oxford University. In addition to her busy repertoire of international performances, Clein is currently a professor at the Royal College of Music London and Music Academy Rostock, and is the artistic director of her own chamber music festival in Dorset. Clein was appointed OBE for her services to music in the 2021 New Year Honours.

Soprano Ruby Hughes began her musical career as a cellist before studying voice at the Hochschule für Musik und Theater, Munich and the Royal College of Music, London. Her operatic debut was as Roggiero in Rossini’s Tancredi at Theater an der Wein in 2009, and she has since performed major roles with the English National Opera, Music Theatre Wales and Scottish Opera, among others. Her first solo recital disc, Nocturnal Variations, was released in 2016. Hughes was shortlisted for a Royal Philharmonic Society Music Award (2014) and won both First Prize and the Audience Price at the London Handel Singing Competition (2009). She records and broadcasts regularly, and frequently performs at festivals and as a recitalist in Europe and the USA, making her Carnegie Hall recital debut in 2017.

Susan Collins makes works in response to specific sites and situations often employing transmission, networking and time as primary materials. Key works include the BAFTA nominated Tate in Space, commissioned for Tate Online (2002); Underglow (2005-6), a network of illuminated drains for the Corporation of London and Brighter Later (2013), a light installation for the Radcliffe Observatory, Oxford driven by live weather data. Since 2002 she has produced a series of year-long pixel by pixel internet transmissions from remote land, sea and cityscapes including Seascape (2009) for the De La Warr Pavilion, Bexhill-on-Sea which captures the South East Coast of England; Wembury & Woolacombe (2015-16), the South and North Devon coasts for RAMM Exeter and the National Trust, and most recently Current (2020-21) which is transmitting live from a ship anchored in the Old Port of Aigio, Greece until September 2021. Collins is Professor of Fine Art and Head of Research at the Slade School of Fine Art, UCL.

Jennifer Rushworth is Associate Professor in French and Comparative Literature at UCL. Her research interests span mourning, medievalism, and music. She has published two monographs; her current book project is on song in the writings of the early twentieth-century French author Marcel Proust. She is also PI for a two-day conference on Song in the Novel at the British Academy (30 September-1 October 2021).

Annika Lindskog is a Lecturer in the Department of Scandinavian Studies (within UCL’s School of European Languages, Culture and Society), teaching language, cultural history, and landscape studies. Her research focuses on music as cultural practice, often in conjunction with landscape ideologies, practices, and approaches. She is the author of a number of articles on 19th and 20th century music, mostly Nordic, and on nature and place. She is the co-editing author of Introduction to Nordic Cultures, a multi-disciplinary and innovative exploration of seminal trends in Nordic culture past and present published by UCL Press last year (2020). Also a classically trained singer, Lindskog is chorally active in chamber choirs, and an enthusiastic language coach for performers of Swedish and Nordic music.

The film premiered at a virtual event in May 2021 as part of the IAS Virtual Festival. Please watch the recording of the event below: