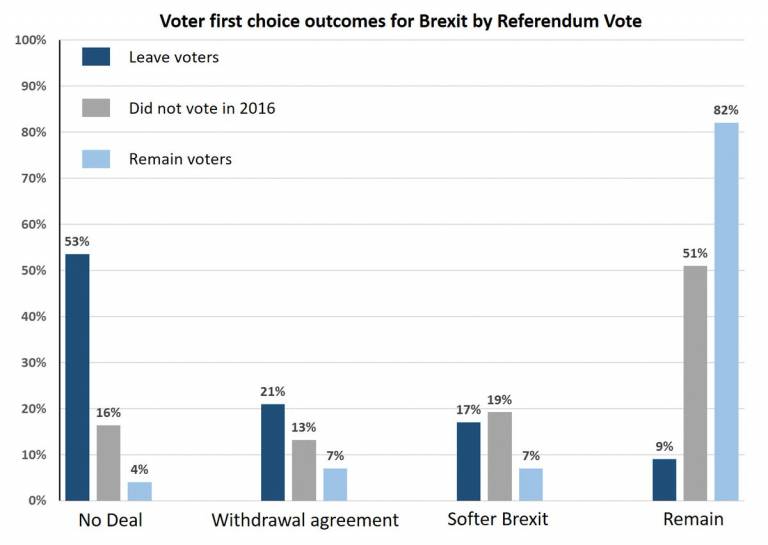 George Peretz QC “This is rather important. Especially to those Remain-inclined MPs wondering whether to prioritise a “Soft Brexit” or another referendum. (It won’t decide for you: but it will clarify the dilemma.)”
https://twitter.com/GeorgePeretzQC/status/1120614386287239173

A first analysis has been published by the HuffPost. The data shows that with No-Deal now leavers’ preferred Brexit outcome, ruling it out could create problems for the Tories. Leave voters are also relatively untroubled by the economic impact of no-deal – in fact more are now worried about the negative impact of leaving with May’s existing deal.

"With No-Deal Now Leavers' Preferred Brexit Outcome, Ruling It Out Could Create Problems For The Tories" 08/04/2019.

Find the results of the survey

In a post for the UCL Brexit Blog, Christina Pagel and Christabel Cooper also shows that as the preferred Brexit outcomes of Labour and Conservative voters harden, both parties stand to suffer in any imminent General Election.

"A General Election is looking more likely – what are the implications for the two main parties?" 12/04/2019

A further analysis of the survey and its learnings for a potential new general election has also been published by politics.co.uk, revealing the full extent of Britain's deep divisions.

The numbers have also been used by Labour MP Owen Smith in his latest opinion piece for The Guardian, calling on the Labour party to embrace its remain-leaning majority.

The latest analysis by Christina Pagel for politics.co.uk shows that different ways of counting can give different results because they take different views of fairness, each of which has good arguments for it. In most situations, the methods give you the same winner but they don't for Brexit because the deep divisions in society.

The survey results were used by Oliver Wright, Policy Editor at The Times, to argue that the British public is just as badly split as MPs over the “best” kind of Brexit, or whether it should happen at all. Christina Pagel commented in the article.

Christabel Cooper and Christina Pagel write a piece for the New Statesman, on the views of Leave voters.

Uta Staiger is the executive Director of the European Institute at UCL.

Christina Pagel is a Professor of operational research at UCL.

Christabel Cooper is a data analyst.