Present and future of research and innovation in Spain, EU and the world 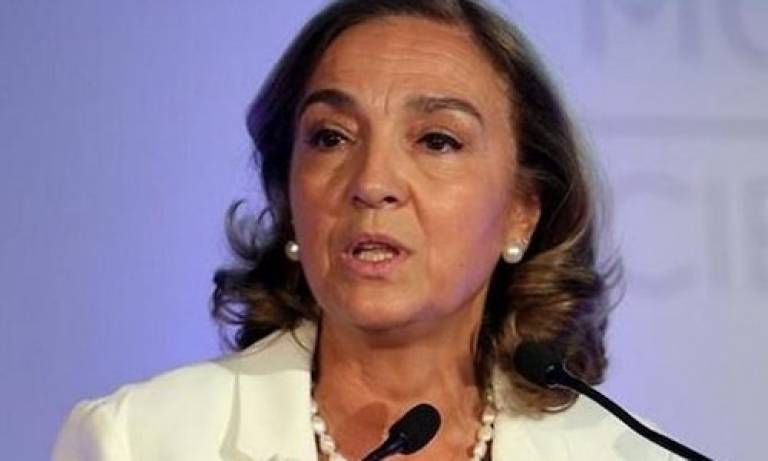 Join the EI, UCL Public Policy, and UCL's Global Engagement Office for a talk by Carmen Vela, Spanish Junior Minister for Research, Development and Innovation, on the role of research and innovation in creating opportunities for growth and prosperity.
Tuesday, 10 April 2018, 6:00pm-8:30pm

In a time in which we face large global challenges, what role do research and innovation play in creating opportunities for growth and prosperity? UCL is pleased to welcome Carmen Vela to discuss her own experience of science and policy at the national and international level, and some of the key challenges and opportunities for research and innovation in the future. Joining Ms Vela in the discussion will be Imran Kahn, Head of Public Engagement at Wellcome and Vivienne Stern, Director, Universities UK International.

The lecture will be followed by a networking reception.

Carmen Vela Olmo has been Junior Minister for Research, Development and Innovation, in the Government of Spain since 2012. She was previously Managing Director of animal health company Ingenasa, President of the Spanish Biotechnology Society and of the Spanish Association of Women Scientists and Technologists, and a member of the Board of Directors of the Spanish Association of Biotech Companies. She is a biochemist with more than 30 years' experience and numerous publications and patents in immunology, virology and related fields.

Imran Khan is Head of Public Engagement at the Wellcome Trust. He leads Wellcome's Engaging Science team, which supports an innovative programme of public engagement in venues as diverse as science centres, art galleries and music festivals, using formats ranging from performing and visual arts to television, film and games. Before joining Wellcome, he was Chief Executive of the British Science Association, and previously director of the Campaign for Science & Engineering.

Vivienne Stern is the Director of Universities UK International (UUKi), which represents UK universities around the world and works to enable them to flourish internationally. Prior to this, Vivienne was Head of Political Affairs at Universities UK. In this role she led the sector's response to several major pieces of legislation relating to universities, including the Higher Education Act 2004. She previously worked in the UK Parliament for the Chair of the Education and Skills Select Committee, and as a higher education policy specialist working on topics including quality, student experience, innovation and university-business links.

Register here for the event.