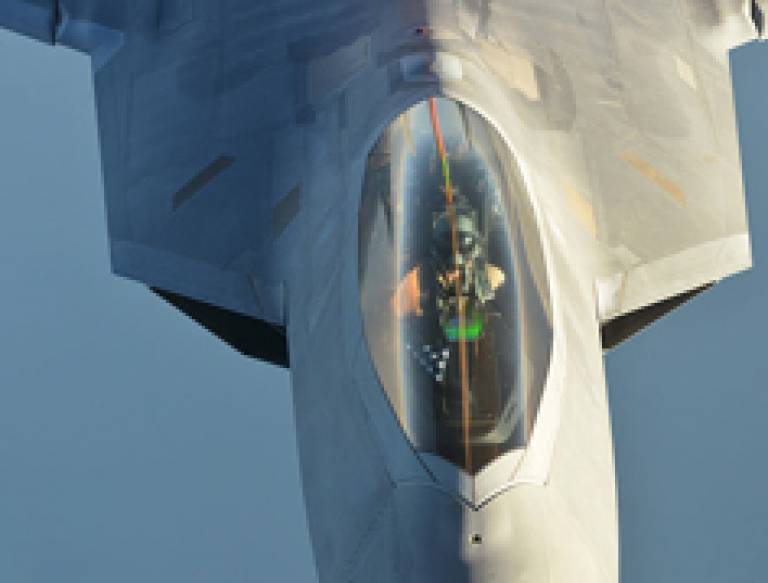 Kristin Bakke, Senior Lecturer in Political Science looks at how air strikes may affect ISIS, given how ISIS rules and how it mobilises support and recruits fighters. Although air strikes might contribute to containing the group and its ability to rule, it is likely to fuel the narrative that fosters mobilisation. To the degree that there is a case for a military response against ISIS, it is, by itself, insufficient.

The tragic terror attacks in Paris on 13 November have raised several urgent questions for European policy makers and the general public. Why did the attacks happen? Who was in charge? How were the attacks organised? And, finally, how can policy makers respond and what might the consequences be?

The French government was quick to blame the Islamic State of Iraq and Syria (ISIS) for the attacks, and ISIS responded by claiming responsibility in an announcement on 14 November - although experts have questioned whether the attacks were directed from the top. France then moved towards a military response by stepping up airstrikes directed at Raqqa, ISIS's de facto capital in the territory it controls in Syria. Here in the UK, after a day of debate in the House of Commons on 2 December, the UK government, which has been part of the US-led air campaign against ISIS in Iraq since last autumn, voted to bomb ISIS targets in Syria as well.

Yet many policy makers and experts agree that airstrikes are an insufficient or non-ideal international response to the problem of ISIS. Even if they were to agree that military action is part of the response, airstrikes alone are not sufficient. However, very few policy makers and experts want to propose a ground invasion - and for good reason. For a ground invasion to be effective, a large number of troops would need to be deployed for an extended period of time, but even in that case, the chances of success are very bleak. This leaves us with calls for a political solution. Indeed, there is more or less agreement that the root of the problem is the lack of a political solution to the civil war in Syria, yet there is little agreement on what that solution is. What is the role of Assad going to be? Which of the many Syrian opposition groups will get a seat at the negotiation table and in a post-war settlement? Would ISIS be part of such a process?

So, in sum, the main response so far to the Paris attacks is more airstrikes. Central to understanding how to defeat ISIS however - and to evaluating the effects of the current response - is to understand how ISIS rules and mobilises its supporters.

ISIS controls territory in both Iraq and Syria. The borders of this territory are fluctuating and there is no international recognition of ISIS as a state. But whether we like it or not-and regardless of whether it is called Islamic State or not - it is an organisation that has state-like qualities. It controls territory. It has governance structures. It has an army. It has some kind of taxation system. It displays symbols of state-ness, such as flags. It has an education system.

In this sense, ISIS is an entity that bears a close resemblance to so-called de facto states. Since World War II, we have seen the birth of more than 20 de facto states. These are places like Abkhazia (in Georgia), Nagorno Karabakh (in Azerbaijan), and Somaliland (in Somalia). They are political and geographic entities that aspire to be states, control territory, and possess domestic sovereignty, but they are not recognised as states by (all of) the 193 recognised states in the international system.

We know that (former) armed actors who control territory - or states, for that matter - can rule both through coercion and consent. ISIS is certainly good at ruling through coercion, using violence most of us see as barbaric. Yet ruling through coercion is a costly strategy, and many actors that rely on this strategy also seek to rule by fostering some degree of consent - some kind of internal legitimacy among the people it rules.

In the context of Abkhazia - a de facto state born out of a violent struggle with its "parent" state Georgia in the early-1990s - my co-authors and I have systematically examined some of the things that foster internal legitimacy in a post-war de facto state. Relying on an original public opinion survey of 1000 respondents in Abkhazia, we sought to capture different aspects of legitimacy. State legitimacy, as we conceptualised it, is akin to what my UCL Philosophy colleague Amanda Greene refers to as "actual quality consent," a positive assessment of governance. We measured it, for example, by examining people's view of the future, asking whether they thought things are "moving in the right direction." Regime legitimacy, in contrast, is not about the state per se but about its governing class. It is specifically about trust in the people in power, and most importantly, in the executive.

In our study, we found that a key source for internal legitimacy is people's perceptions of the de facto state authorities as state builders, able to provide public goods to their citizens. In developing our argument, we built on long-standing works that suggest that legitimate authority rests with an implicit social contract between "ruler" and "ruled." The ruler provides benefits to the ruled and the ruled, in turn, accept the ruler's right to rule. So, the survey asked the respondents a range of questions aiming to capture their assessment of state-building achievements (or lack thereof). We found that the more people were concerned about a lack of democracy or influence, about a lack of economic development and material safety, and - importantly - about a lack of physical safety, the less likely they were to find the state and/or the regime legitimate.

Though ISIS-controlled territory is far from a post-war setting (and their control of territory is much more in flux), our study may have implications for how we understand ISIS and the likely effects of the current strategy against it.

We know that ISIS rules through coercion, but there has been a number of reports showing how they have also taken steps to provide public goods, such as schooling, electricity, employment, law and order - though to varying degrees of success. Of course, there is no systematic evidence, as in surveys, telling us what people under ISIS-rule think of the organisation. However, there are enough reports suggesting that ISIS may have fostered some degree of consent, at least in the short-term, to dismiss this aspect of their ruling strategy and state-building efforts.

Stepping up the air strike campaign may contribute to diminishing ISIS' ability to hold territory and rule, as well as its ability to provide security to its "citizens." Airstrikes will also probably diminish ISIS' ability to provide economic public goods, especially as they are directed at one of its main sources of revenue, oil fields (although given a complex production system, this effect is not entirely straightforward). As such, stepped-up airstrikes can help diminish whatever legitimacy the organisation might have.

The problem, however, is that currently the main alternative to ISIS-rule in Syria is rule by Assad. Assad is not much better when it comes to offering security to the citizens - or economic development, for that matter, given the state of war-torn Syria. This very alternative was key to the rise of ISIS in the first place, and the war itself has but confirmed that Assad is a major threat to his own citizens. More people have died at the hands of the regime than at the hands of ISIS, and survey evidence suggests that more people fleeing Syria are fleeing due to violence by the regime than rebel groups.

Any present or post-war authority's legitimacy and ability to rule requires a political strategy that addresses the provision of public goods, including both material and physical security to the citizens. Winning the war, which is unlikely to happen through airstrikes alone, is just the beginning, and is unlikely to happen unless there is a clear and improved alternative to ISIS rule.

In addition to some level of tacit local support - or perhaps 'tolerance' is a better word - ISIS has been able to recruit fighters from abroad, such as experienced fighters from nearby countries as well as fighters from the West. In the UK and rest of Europe, the political debate about Western fighters for ISIS has focused mainly on the concern that they will return and engage in terrorist attacks back home-a concern underscored by the Paris attacks.

Research on foreign fighters is a fairly new research agenda, but in the last few years scholars have studied the processes of foreign fighter and jihadist mobilisation and radicalisation. There are several important insights here that matter for how one thinks about defeating ISIS and the potential consequences of the current strategy.

First, although there are certainly those who are motivated to go and fight abroad by a sense of adventure and self-fulfilment, many do have more altruistic motives, for example choosing to go to help fellow Muslims in need and to provide humanitarian assistance. David Malet and Thomas Hegghammer have shown that successful recruitment strategies tend to emphasise solidarity based on threats to a transnational identity community, highlighting a victim narrative through mass propaganda. This is important for assessing the consequences of the current strategy against ISIS, which is an organisation that is very good on the propaganda front (check out Aaron Zelin's data collection). The question then is: do stepped-up airstrikes fuel the mobilisation narrative of the organisation? If they do - and many would argue that they do - is this drawback offset by any potential benefits of the strategy?

Second, what about the impact on terrorist attacks back home? Hegghammer has examined variation in Western jihadists' choice between fighting abroad and terrorism at home, covering the years 1990-2010. His study is the only systematic one of the phenomenon, and draws on open-source data on terrorist plots in the West, the perpetrators in these plots, and the overall supply of foreigner fighters. Hegghammer's findings suggests that although we should be worried about a "blowback effect," few Western foreign fighters go abroad with the aim of being trained up for terrorist operations back home, and a relatively small portion of foreign fighters end up engaged in terrorist plots on their return. That's the good news. The bad news is that those who do come back and engage in terrorist attacks at home are more effective than terrorists who did not go abroad.

A key determinant for why some engage in attacks when they come back is whether the organisation they joined had an "attack the West" ideology, such as al-Qaeda Central and al-Qaeda in the Arabian Peninsula. Initially, it looked like ISIS was less of a worry in this respect, though this has changed in the last few months. What we know less about is whether and how the West's strategy against the organization matters for that shift, but again, a potential drawback of the current strategy, is that it justifies the organization's move towards attacking the West. And, again, that potential drawback needs to be considered in the same calculation as any benefits of the strategy.

These concerns - along with the concerns about ISIS's state-building efforts- all point in the direction that to the degree that there is a case for a military response against ISIS, this can only be one part of the response. Unfortunately, despite the steps taken at the Vienna talks in November, there is little progress when it comes to thinking about the other parts of the response.

Dr Kristin M. Bakke is Senior Lecturer in UCL's Department of Political Science.
Note: The views expressed in this post are those of the author, and not of the UCL European Institute, nor of UCL.