The exhibition ‘Women at UCL: Presence and Absence’ was created to celebrate and recognise women at UCL who inspire those they work with. There was a fantastic response to the call for nominations, with over 200 submissions showing the real impact UCL women have their colleagues.

The exhibition also contained a series of artworks titled 'Theirs to Ours' by London artist Kristina Clackson-Bonnington. The twelve mixed-media works, exploring the history of women at UCL, illuminate the institutional change that has taken place since the founding of UCL in 1826 – from the initial decision to admit women in 1878, to the renegotiating of spaces and positions that is still taking place today.

The Representation of the People's Act, passed on 6 February 1918, extended the right to vote to women of a certain age and economic status. Ten months later, on 14 December 1918, 8.5 million women voted for the first time.

Forty years before this, UCL became one of the first universities in England to admit women on equal terms with men.

In order to celebrate the passing of a hundred years of women winning the right to vote, UCL has organised events and exhibitions all around campus highlighting the pioneering work of women at UCL.

"These events will give us an eye-opening insight into the barriers women have faced at UCL and in the wider world, and how far they were able to achieve and learn from the past year. I'm delighted that UCL is playing such an active role in celebrating this centenary year, and I think it will provoke a lot of debate about how far we have come and how far we still need to go."

Find out more about the events throughout 2018 taking place and how you can get involved. 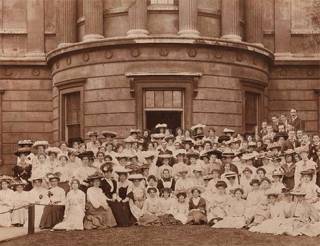