More frequent internet use has been linked to increases in wellbeing in older adults, particularly those who are wealthy and more educated, finds a study authored by Dr Stephen Jivraj and Dr Shaun Scholes (both UCL Epidemiology & Health). 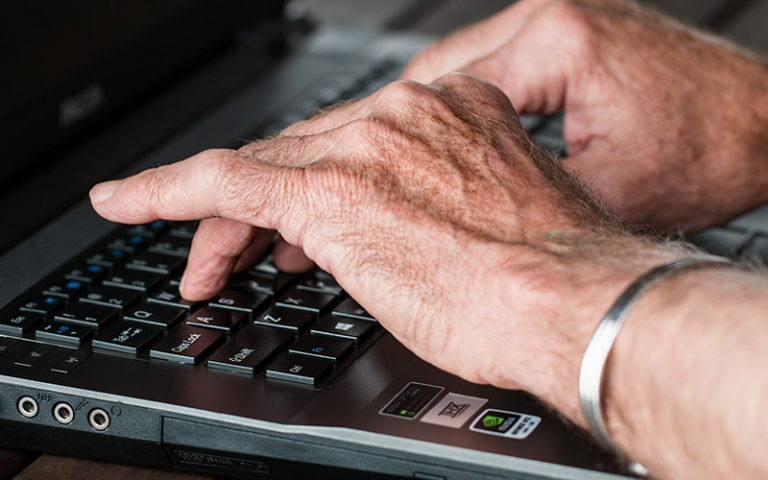 Published today in the Journal of Medical Internet Research, it is the first study of its kind to examine the links between different internet usage and the associated impacts on mental health, and reveals that those from higher socioeconomic groups are reaping benefits to mental wellbeing not experienced by others.

The study explores accounts of more than 9,000 people over the age of 50, over a period of six years (2012 - 2017). Researchers found a positive long-term effect of using the internet daily, with infrequent use (monthly or less) associated with deteriorating levels of life satisfaction among older people.

Over the period of the study, daily users saw larger increases in their life satisfaction scores than those who used the internet weekly or never, and had the highest scores overall by the end of the study.

However, the impact on mental wellbeing was found to vary by internet use type, the most common of which are ‘information access’ and ‘communication’, with 68% and 66% of participants reporting use of these two types, respectively. People who used the internet for ‘communication’ and keeping in touch with others, specifically for sending emails, were more likely to report lower levels of depression, as well as better life satisfaction than those who did not. Yet those who used the internet for ‘information access’, specifically searching for jobs, had worse life satisfaction compared to those who did not, even when working status was taken into consideration.

The research team found that those in the wealthiest quantile were most likely to use the internet daily; 31% of daily users were from the most affluent group, while those from the least affluent group accounted for 9% of daily users. Those in the highest educational and occupational groups experienced a larger positive impact of frequent use on mental health than those in the lowest groups. The differences in depression and life satisfaction scores were steeper over time for those with a degree compared to those without, highlighting the greater potential for those with higher educational backgrounds to improve their mental wellbeing through more frequent internet use than others.

To help close these gaps and improve mental wellbeing, the authors recommend encouraging older people to use the internet to socialise, to help mitigate the impacts of social isolation and loneliness on mental health. Currently, according to the study, around 56% of older adults go online every day, whilst over a quarter have never used the internet.

Senior author, Dr Stephen Jivraj (UCL Epidemiology & Public Health), said: “While some studies suggest that spending an excessive amount of time on the internet correlates with negative mental health in younger age samples, our research suggests that more should be done to encourage internet use among older adults, especially as a tool for building and maintaining social ties to improve wellbeing. Initatives such as installing public Wi-Fi in areas frequented by older people and in areas where usage may be low due to barriers to access and digital exclusion could help to address this.”

The authors highlight that there are various reasons why older people may not use the internet: the barriers to access can be much more than about availability.

Co-author, Dr Shaun Scholes (UCL Epidemiology & Public Health), said: “It’s important to recognise that many older people have not learnt to use the internet as part of their job or education. While there isn’t one simple intervention that can increase internet usage in older age, we do recommend that policymakers encourage providers to consider adapting their products and interfaces to be more age-friendly.”

The authors recommend that producers of both hardware and social software take into account the needs of novice users and those with impairments more likely to be experienced by those of an older age, such as poor eyesight. This would require manufacturers to be sensitive to these needs when designing products and making the accessibility settings easy to navigate to change features such as text size.

This work was supported by the Q-Step Centre funded by Nuffield Foundation, Economic and Social Research Council, and Higher Education Funding Council for England Q-Step program. Data were obtained from ELSA, a nationally representative sample of the English population aged 50 years and older. Established in 2002, the sample has been followed up every two years. Data were collected through computer-assisted personal interviews, self-completion questionnaires, and nurse assessments every four years. The analysis in the study used data from waves 6 (2012-2013), 7 (2014-2015), and 8 (2016-2017).