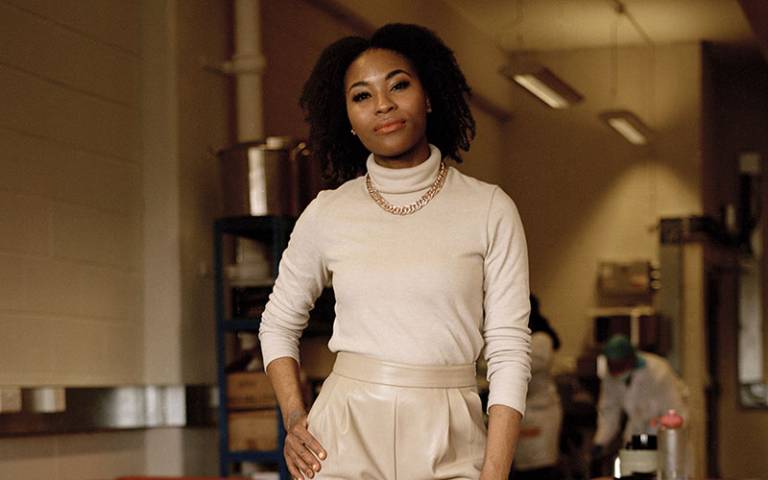 Afrocenchix is now valued at over £12 million with annual sales of around £650,000 in 27 countries, and backers including Google. UK stockists include Superdrug and Whole Foods Market, and the company is now aiming to target the US and African markets.

While growing the business, the team is on a mission to challenge mainstream perceptions of beauty in society and to celebrate afro hair. They’ve also highlighted the considerable barriers faced by black women entrepreneurs, who attract just 0.03% of all venture capital funding.

The science and business of cosmetics

Rachael and her co-founder grew up using harsh chemicals to straighten and ‘tame’ their natural afro hair. As adults, they became increasingly concerned about the growing body of evidence suggesting that these chemicals might cause harm over time, with potential links to cancers, respiratory problems and adverse skin conditions. They wondered if there might be a natural alternative to caring for afro hair that also celebrated, rather than subjugated, afro hairstyles.

With just £100 they bought some ingredients and started experimenting with natural formulations. They established Afrocenchix in 2010, selling products through word of mouth and to family and friends, while also researching the science and business of cosmetics.

Rachael had long harboured a passion for science, and undertook a Master’s degree in Medical Anthropology at UCL, while still running the business.

“Afrocenchix is really all about health and wellbeing. We started, largely because of our alopecia and my eczema, trying to come up with a solution. We also talked a lot about how strange it is that, as a black woman, you don't feel as though you’re acceptable in the workplace unless you have straight hair. And the way to straighten your hair is to apply very dangerous, toxic chemicals.

“In terms of the Master’s, medical anthropology is very much a cross-cultural study of health and illness, and perceptions of illness and how it should be treated. So there were some overlaps there.”

To grow the business, Rachael entered the UCL Bright Ideas competition in 2015 (now Build your own business 3: Launch your business) and won.

“We’d built up this community and this tribe and that meant that in 2017 we were able to launch our first proper website and could hire our first employees,” says Rachael.

Afrocenchix has gone on to win several awards including the ‘Best Natural Hair Brand’ in both the Precious Hair and Beauty Awards, and BBFA (Black Beauty and Fashion) Awards. It’s also been named one of the ‘hottest Black-led startups in Europe’ by CityAM.

After a successful pre-seed round in 2019, the founders have now been backed by Google in the latest $1.2 million seed round. Having sold over 70,000 products to date, Afrocenchix has been using the funds to grow the team to 14 people. They’re developing three new products for release over the next year.

“We have a lot more demand than we can actually supply so the biggest thing is scaling up manufacturing. We're still doing a lot of production in house, but we have better machinery and we've started outsourcing to a partner factory who share the same ethics and sustainability values.”

Rachael has also written about the many barriers and occasional discrimination that she’s faced as a black woman entrepreneur, particularly when trying to raise vital funds to grow the business.

“I don't like to dwell on the negatives too much. Especially in business, you need to be an optimist. But the reality is you have to let people know what's going on if it’s going to change.

“I think we need serious reform because we're potentially missing out on the next Bill Gates or Mark Zuckerberg simply because their name sounds African or Asian or they’re a woman or they’re disabled. That's the crux of it.”

For Rachael, the best way she can challenge perceptions in the industry and make a difference, is by continuing to work hard and grow Afrocenchix into a globally successful, visible business.

Watch a video about Afrocenchix

In this video, Rachael talks about the success of Afrocenchix and how UCL supported them in getting started.