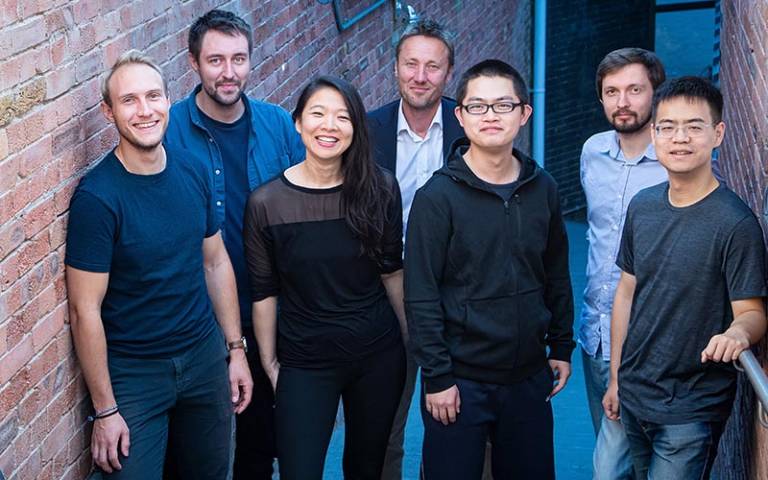 Since then, the company has attracted significant interest and has partnered with some major players in the field including Microsoft, Nvidia and IBM. Rahko also recently raised £1.3 million in investment in a seed funding round led by European venture capital firm Balderton Capital, with participation from venture capital firm AI Seed and a small group of strategically chosen angel investors.

Miriam explained: “This is one of the most exciting areas to be working in. The field is developing extremely quickly and demands a great deal of agility. As a startup with a team of exceptional scientists, we have the energy and expertise to play a significant role in the direction of the field and sit at the table with some of the world’s tech and industry leaders.”

A new kind of computing

Rahko describes itself as a quantum machine learning (QML) startup. The company is focused on developing machine learning software to run on the first generation of truly practical quantum computers, which will be available in the near term, to help solve industry problems.

Quantum computers operate in a very different way to classical computers. They take advantage of the unusual phenomena of quantum mechanics, for example where subatomic particles can appear to exist in more than one state at any time.

The advantage of this unique underlying architecture is that quantum computers can, in theory, solve problems which are difficult or impossible for classical computers. These include understanding the precise behaviour of electrons in solids such as crystals, which is critical in the design of new catalysts or for novel battery designs.

Big tech companies such as Google and IBM have made important strides in building quantum computers. However, major challenges remain in developing practically useful and general purpose quantum computers, including issues around the error rates of calculations and associated noise.

The big companies are currently working on engineered solutions to the error problem, but an alternative approach might be to use machine learning. Machine learning is a type of artificial intelligence where computer systems learn from data, spot patterns and make decisions without supervision.

This is the basis of Rahko’s approach, and by adopting QML they believe it can have a real impact in the field soon.

One of the areas they’re applying their technology is chemistry simulations, for example to understand how materials behave and how chemicals interact. One particularly interesting problem is designing the chemical composition of more effective batteries. These could be used in the next generation of electric vehicles, which will need large capacity but the stability to be safe in the event of an accident.

The cutting edge of research

The inspiration for Rahko partly came about through Leo Wossnig’s research as a PhD candidate in the UCL Department of Computer Science.

The commercial proposition came into greater focus when the other members of the leadership team got together. Rahko was officially incorporated at UCL’s BaseKX startup space, near King’s Cross, where they received advice and mentoring on everything from recruitment to contracts.

Having secured seed investment from Balderton Capital and fellow investors, they’ve moved to a new office in North London, where they plan to grow their team of niche experts.

Jerry Allen, Director of Entrepreneurship at UCL Innovation & Enterprise, commented: “Rahko is an example of a startup at the absolute cutting edge of technology, who’ve benefited from the unique ecosystem and world-class research base UCL has in quantum computing and AI.

“It’s an incredibly fast-moving field, but by taking an agile and innovative approach, I believe they can have a real impact very soon. I’m extremely proud of what they’ve already achieved in a short space of time and wish them the best of luck as they move from UCL into their new home.”