Helping people imagine what it’s like to be a character on stage was the aim of an exciting collaboration between UCL, the English National Opera and creative studio Holition. 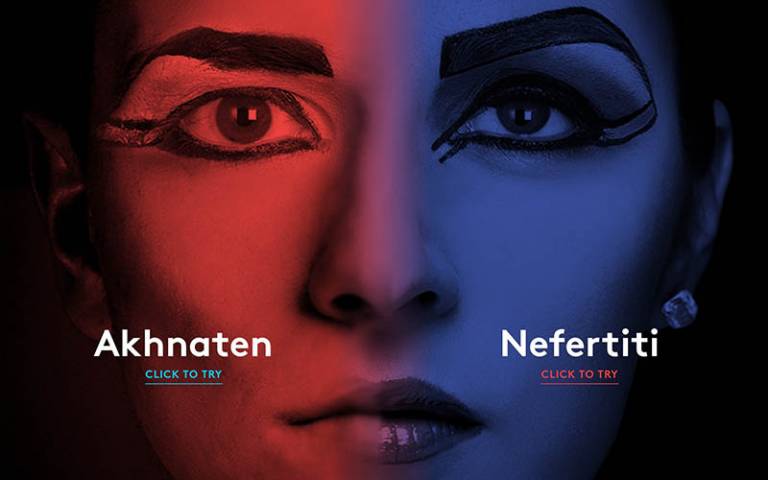 Technology to fire the imagination

All good storytellers can make audiences empathise with their characters and inhabit their worlds, whether fictional or historical. Technologies such as augmented reality (AR), which overlays dynamic digital content onto a real-time view of the world, can help the imagination process.

AR has long been on the radar for Yvonne Rogers, Professor of Interaction Design, Director of the UCL Interaction Centre (UCLIC) and a Deputy Head of the Computer Science department.

“I’m very interested in how we can use technology to extend and augment what people do, whether that’s in the arts or education or in the workplace setting,” she says.

Following an introduction to the English National Opera (ENO), Yvonne saw an opportunity for a collaboration, inspired by the ENO’s production of Akhnaten, at the London Coliseum. They also brought in creative innovation studio Holition, a company with long-standing links to UCL. The collaboration was facilitated by UCL Innovation & Enterprise which also provided knowledge exchange funding.

What ultimately came about was a project called ‘Stepping into character’. Led by a final year undergraduate computer science student Delia Gander, it involved the development of an iPad app called MagicFace.

Using the front-facing ‘selfie’ camera as a ‘mirror’, the app superimposes on the user elements of the style and makeup of the two lead characters in the production, Akhnaten and Nefertiti. The superimposed features of the characters are dynamic and life-like, responding and conforming to users’ facial expression, gestures and head angle.

The iPad app was used by members of the cast and production team, as well as visitors including school groups, to virtually try-on the two characters’ makeup and ‘step into character’.

Anthony Roth Costanzo, who plays Akhnaten on stage, commented: “It’s incredible technology. This gives us a sense of what it’s going to look like in advance.”

Director of ENO Baylis, Natasha Freedman, added: “I was very excited by the opportunity to illuminate technical and design aspects of the opera world, opening up the world behind the scenes and exploring the potential for integrating new technologies into our working practice.”

The makeup and costumes for the Akhnaten production were designed by Kevin Pollard (ENO) drawing on historical research and inspiration from the time of Akhnaten’s reign (1351 to 1334 BC). Pigments used in that period included red ochre, malachite, kohl and henna.

The MagicFace app incorporates some of that historical detail, and was adapted to be placed in UCL’s Petrie Museum of Egyptian Archaeology for three months to coincide with a special exhibition.

Yvonne said: “The curators thought it was great, as it brought alive static objects and was animated and interactive, without being overly disruptive.”

Since the completion of these two projects, Delia has joined Holition as a user experience designer. She’s now helping the company develop a commercial virtual try on product for high-end makeup brand Charlotte Tilbury.

Meanwhile, Yvonne is looking to build on the project, by developing 3D modelling of the whole body as part of an augmented reality app. “People get it straight away as to what we’re trying to do, it’s very visible and very immediate, which is often is quite difficult with technology,” she said.

The ‘Stepping into character’ project is just one facet of wider cooperation and collaboration between UCL and the ENO.

UCL academics have also taken part in pre-performance discussions relating to ENO productions. For example, Dr Judith Beniston spoke before a production of The Merry Widow, by Austro-Hungarian composer Franz Lehár. As an associate professor in the UCL School of European Languages, Culture and Society, her main research interest is in Austrian literature and cultural history (1890 to 1945), with a particular emphasis on drama and theatre history.

UCL students have previously attended dress rehearsals at the ENO for free through the ‘Baylis in the Balcony’ scheme as well as salon discussions about creative practice, connecting them to professionals working in the industry.

Watch a video about the MagicFace app

Find out more about the project and see the app in action in this video:

The Stepping into Character project was made possible through an Enterprise Secondment funded by the Engineering and Physical Sciences Research Council (EPSRC) Impact Acceleration Account (IAA 2017-20).