Matthew Sperling joined UCL in 2016 as Lecturer in Literature in English from 1900 to the Present Day. Before that, he held positions as Leverhulme Trust Early Career Fellow at the University of Reading and Fellow by Special Election at Keble College, Oxford. He studied at Gravesend Grammar School and the University of Oxford.

Matthew's first novel, Astroturf, was published by riverrun in August 2018, and was longlisted for the Wellcome Book Prize 2019. His second novel, Viral, will be published by riverrun in September 2020. His writing has also been published in 3:AM, Best British Short Stories 2015, The Guardian, The Junket, The Literateur, the New Statesman, The White Review, and elsewhere.

Matthew’s scholarly research focuses on modern and contemporary literature and the history of publishing and the book. His monograph, Visionary Philology: Geoffrey Hill and the Study of Words, was published by Oxford University Press in 2014. He has contributed chapters, articles and reviews to many publications, and he regularly writes about modern art for Apollo: The International Art Magazine. 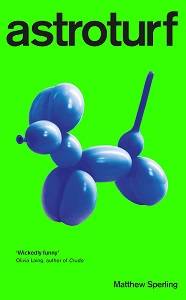 ‘A brawn cocktail that nails the zeitgeist... a clever and well-paced morality tale for the modern age’—Sarah Gilmartin, Irish Times

‘I loved Matthew Sperling’s sly, subversive novel, a wickedly funny tale of how to come out on top in a fake news world’—Olivia Laing

‘Outrageous, sexy and funny. Sperling writes with the caustic economy of Waugh or Spark, but his characters have more heart, including the sockpuppets. The plot is so taut I'm still trying to work out how he brings the tension of a heist movie to thirty-something bedsit London’—Luke Kennard

‘it proceeds with the briskness of a screenplay... the author is to be commended for the controlled and unobstrusive voice of his third-person narrator’—Houman Barekat, Times Literary Supplement

‘A tale about steroids which seems to be on steroids itself: sleek, muscular and just slightly too real’—Kate Clanchy

‘A brilliant anatomy of a certain proliferating type of contemporary masculinity: Instagram-approved, swole with self-regard, yoked with desperation, and, like this novel itself, equipped with an alarmingly strong grip’—Adam Foulds

‘this sharp, short, timely novel is not only a powerful account of performance-enhacing drug use, but a snapshot of contemporary masculinity – not caricatured or simply dismissed as “toxic” but brought to life with empathy and wit’—New Statesman

‘A frank and remarkable debut from a new and authentic voice. I love Matthew Sperling’s exploration of masculinity, love, and the plural identities that entangle us all in the contemporary world’—Xiaolu Guo

‘Sperling’s plundering of the archive makes this study an invaluable and highly revealing document of Hill’s poetic and scholarly life… the academic monograph invites us to read it as a brilliantly unconventional biography of its subject’—Stuart Farley, PN Review

‘Matthew Sperling has produced an indispensable book on the poet… He has also, by the way of delineating Hill’s intellectual genealogy, written a slender but learned history of English romantic philology, an important study that will repay the attention of scholars and critics interested more broadly in the politics and theology of language’—Paul Franz, Religion & Literature

‘Visionary Philology is an outstanding work of scholarship and synthesis’—Beau Hopkins, Notes & Queries

‘a passionately informed, thoroughly fascinating exploration of Hill’s published and unpublished thought, and one that is sure to set the agenda for further research on this major poet’—Karl O’Hanlon, Modernism/modernity

‘Visionary Philology has performed an invaluable task in its patient account of a variety of abstruse and sometimes rebarbative ideas’—Alex Pestell, The Review of English Studies

‘this lean monograph is a superb example of lively and rigorous scholarship, achieving a double whammy by making significant contributions to our understanding of both Hill and literary philology’—James Underwood, The Modern Language Review

‘Geoffrey Hill and Publishing: “The Recalcitrance of the World”’, in Andrew Michael Roberts (ed.), Strangeness and Power: Essays on the Poetry of Geoffrey Hill (Bristol: Shearsman, forthcoming)

‘Not Feeling at Home: Poetry and the Hidden Injuries of Class’, in Tom Phillips (ed.), The Other Lives of Peter Robinson: Essays on his Writing (Bristol: Shearsman, forthcoming)