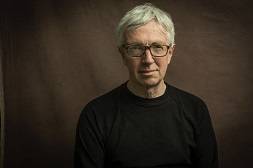 John Mullan studied for his BA and PhD at the University of Cambridge.

He has been Professor of English since 2005, and was appointed Lord Northcliffe Chair of Modern English Literature from 1st October 2016.

He was General Editor of the Pickering & Chatto series Lives of the Great Romantics by Their Contemporaries, and Associate Editor for the Oxford Dictionary of National Biography.

He is a regular TV and radio broadcaster and a literary journalist; he writes on contemporary fiction for the Guardian and was a judge for the 2009 Man Booker Prize.

John is a specialist in eighteenth-century literature and is at present writing the volume of the Oxford English Literary History that will cover the period from 1709 to 1784.

He has edited a number of works by Daniel Defoe and his edition of Samuel Johnson’s Lives of the Poets was published in 2008. [Editions]

He also has research interests in the nineteenth century, and in 2012 published his book What Matters in Jane Austen? He has edited Sense and Sensibility for Oxford World’s Classics; his edition of Emma is forthcoming.

His most recent book is The Artful Dickens (2020).

Sentiment and Sociability. The Language of Feeling in the Eighteenth Century (Oxford University Press, 1988)

Anonymity. A Secret History of English Literature (Faber and Faber, 2007)

What Matters in Jane Austen? (Bloomsbury 2012)

Ed. with Introduction, Lives of the Great Romantics by Their Contemporaries: Shelley (Pickering & Chatto, 1996)

Ed. with Introduction, Daniel Defoe, The Political History of the Devil and A Journal of the Plague Year (Pickering & Chatto, 2004)

Ed. with Introduction, Daniel Defoe, A Journal of the Plague Year (Pickering & Chatto, 2009)

1997 'Feelings and Novels', in Rewriting the Self. Histories from the Renaissance to the present, Routledge: 119-31.

2005 ‘Psychology’ in Contexts and Commentaries, a companion volume in the Cambridge Edition of the Works of Jane Austen, ed. Janet Todd, Cambridge University Press: 377-86.

2012 ‘Fault Finding in Johnson’s Lives of the Poets’ in Samuel Johnson. The Arc of the Pendulum, ed. Lynda Mugglestone and Freya Johnson, Oxford University Pess.