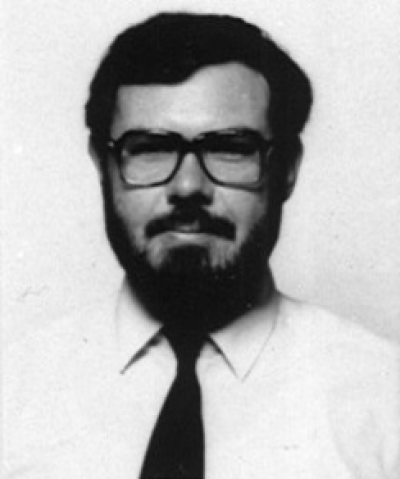 It is with great sadness that we learned that Dr Roger Arthur Giblin, a tremendously popular and engaging teacher of electronic engineering, died on 16th January 2014, two days before his 75th birthday.

Roger then worked as a Scientific Officer with John Gittins and John Carroll in the Services Electronics Research Laboratory (SERL) Microwave Division (MoD) at Baldock in Hertfordshire.

In 1965 he married Margaret. They had two children: Alison and Ian; and three grandchildren: Aaron, Jack and Miles.

In March 1969 Roger took up a Lectureship at UCL's Department of Electronic & Electrical Engineering. It was Professor Alex Cullen and Sir Eric Ash who appointed Roger after they had attended a seminar at SERL where Roger gave a presentation on avalanche diodes. According to Eric, Roger’s was the only talk that entertained as well as informed. Roger was promoted to Senior Lecturer in 1976.

In 1978, together with colleagues Brian Culshaw and Peter Blakley, Roger published a book on Avalanche Diode Oscillators.

Amused by the irony, in 1978 Roger took on the role of Admissions Tutor from the man (H. Marriott) who had rejected his undergraduate application in 1957. In this capacity, he defined the destinies of numerous students by his charm and warmth during interviews, leading them to choose UCL as a place of study. He continued in this role until 1983 when his Head of Department, Eric Ash, encouraged him to undertake a full-year’s sabatical as Visiting Scholar in Applied Physics at the Ginzton Laboratory, Stanford University.

Roger was adored by his students, deeply appreciated as a teacher, as a constant source of help, wit, charm, warmth and support. His lecture notes were a masterpiece in clarity, accuracy and inspiration.  In the words of his students, he was a “superb, inspiring, entertaining, kind, witty, irreverent and engaging lecturer to all”. His motto was “A giggle a day keeps the gloomies away” and he used humour to create the most wonderful aide-memoires including “Ohmwork” and the concept of the “Gaussian Potato”. Students would reproduce his jokes in their exam scripts: through analogy with complex numbers, these were marked by Roger as “j-components”, but he always advised that only the real parts of the mark would be considered by the exam board. He also emphasised that the mark awarded is always the component of the student’s answer in the direction of the question!

Such was the respect for Roger, that with special permission from Provost Sir James Lighthill (1979-1989) he was chosen to be the personal Tutor for a rather exceptional 14-year old student, one of the youngest undergraduates ever to be admitted to UCL.

Between 1982 and 1986 Roger wrote a regular column entitled “Citizen 2000” for the Institution of Electrical Engineers (now Institution of Engineering and Technology) publication "Electronic System News" in which he (sometimes remarkably accurately) discussed the likely technology developments in the future. 30 years on, these articles read today as very relevant and timely - and, of course, very amusing.

Roger was delighted to obtain funding from the Department of the Environment to support his “Statistical Aerodynamics Research Group” in order to investigate more environmentally-sensitive replacements for leadshot.

For Roger, these were “golden days” - getting Government funding to pursue his hobby of clay target shooting with lots of final year projects over the period 1982 to 1996 and much fun was had by all, especially since it meant field trials on shooting ranges, notably the famous Holland and Holland grounds at Northwood and West Kent Shooting School at Paddock Wood. With much appreciated technical support from Trevor Hamer, Jim Van Sickle and Alan Gorrod, Roger’s shotgun ballistics projects culminated in a successful PhD and full length paper in the Proceedings of the Royal Society London.

As well as academic publications he also published science fiction, and articles on shooting, under the pen-name Clay D. Renmore.

In 1993, with his colleague Professor Dave Delpy in the Department of Medical Physics and Bioengineering, Roger launched an undergraduate module “E754: Medical Transducers” with the aim of introducing EE students to medical applications of electronics. Over the years this module evolved to become "Physiological Monitoring", and in the later years of Roger’s time at UCL he enjoyed engaging with medical students who also chose this module and came to appreciate how circuit theory could aid their understanding. A further research activity where Roger demonstrated his compassion and empathy for others was in the technically challenging creation of sensory aids for the deaf-blind.

Roger retired from UCL in 2004, but continued to correspond with former students who had first been enthused by him to study at UCL.

We will miss him greatly, but hope that through his lecture notes and those of us whom he inspired, his gentle humour will continue to amuse and educate future generations of students.

We send our sincerest condolences and sympathies to Roger's wife, children, brother Peter and the rest of the family.