The Earth’s core as a reservoir for water.

New paper and cover of @NatureGeosci: The Earth’s core may host most of the planet’s water inventory, according to calculations of the partitioning behaviour of water at conditions of core formation. Authors: Yunguo Li, Lidunka Vočadlo, Tao Sun & John Brodholt. 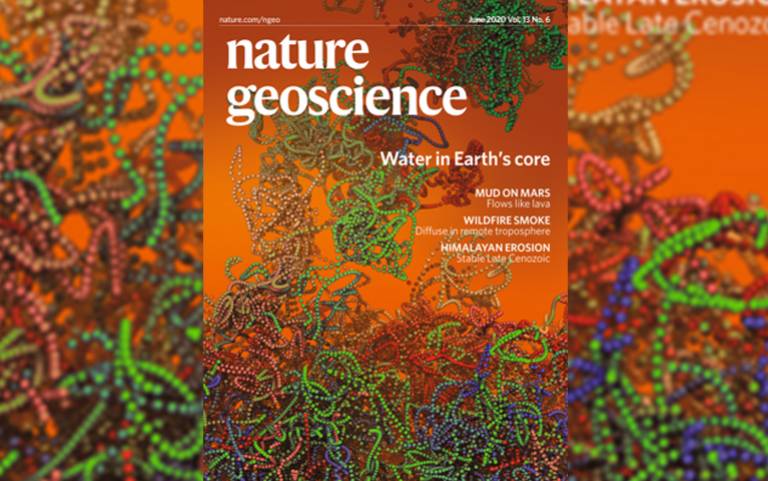 The Earth’s core may host most of the planet’s water inventory, according to calculations of the partitioning behaviour of water at conditions of core formation. The image in Fig.1 above is from an ab initio simulation showing that hydrogen strongly prefers to enter iron melts rather than silicate melts.

Current estimates of the budget and distribution of water in the Earth have large uncertainties, most of which are due to the lack of information about the deep Earth. In this paper we have calculated whether water would like to go into the core during core formation or stay in the Earth's rocky mantle. Using ab initio molecular dynamics and thermodynamic integration techniques, our calculations at 20–135 GPa and 2,800–5,000 K show that water prefers to be in liquid iron rather than silicate melts (partition coefficients greater than 1 in Fig. 2). We therefore conclude that the Earth’s core may act as a large reservoir that contains most of the Earth’s water.

This work was carried out by Yunguo Li, Lidunka Vočadlo and John Brodholt of UCL Earth Sciences and Tao Sun of the Chinese Academy of Sciences in Bejing. It was supported by NERC grant NE/M015181/1 and NE/S01134X/1 both awarded to LV. The calculations were performed using the NEXCS system (a partnership between the Met Office and NERC) and ARCHER, the UK National Supercomputing Service. T.S. acknowledges the Strategic Priority Research Program (B) of the Chinese Academy of Sciences (Grant no.XDB18000000).