By Dr Samantha Buzzard on the workshop to facilitate collaborations between UK and Russian researchers in the Russian Arctic. 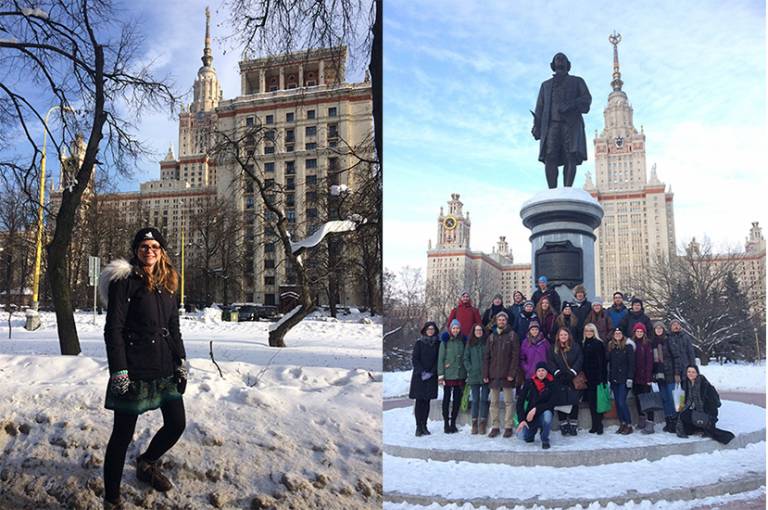 This February I helped to organise a workshop for early career researchers in Moscow. The aim of the workshop was to facilitate collaborations between UK and Russian researchers in the Russian Arctic. This was especially important for me as a sea ice scientist; our work in the Centre for Polar Observation and Modelling at UCL would benefit from more data from the Russian Arctic.

The workshop was funded and organised by the NERC Arctic Office and the UK Science and Innovation Network in Russia, in partnership with the UK Polar Network and the National Committee of the Association of Early Career Polar Researchers in Russia. I was involved as the representation for the UK Polar Network, a group of more than 600 early career scientists working on a variety of aspects of polar research in the UK.

14 UK early career scientists travelled to Moscow for a two day workshop, braving the -14 degree temperatures to travel to the beautiful campus of Lomonosov Moscow State University, the impressive main building of which (the tallest educational building in the world and the tallest building in Europe until 1990) is one of Moscow’s distinctive ‘Stalin skyscrapers’ or ‘Seven Sisters’.

The Russian organising committee had planned a comprehensive timetable that included plenty of time for discussion with our Russian colleagues on ways to overcome problems in working together; we were surprised to find quite so many similarities between the issues we had with our work. We also had time for a tour of the campus and to enjoy some of the sights of Moscow.

The conference dinner gave further opportunity to sample Russian cuisine and get to know each other better. We look forward to welcoming some of the Russian researchers to Cambridge at the end of March for a follow up event to continue some of the already very productive discussions.