A UCL team of Dr Christopher Kilburn (UCL Earth Sciences), Prof Steve Hailes (UCL Computer Science) and Lara Smale (PhD UCL Earth Sciences), in partnership with the Vesuvius Observatory - National Institute of Geophysics and Volcanology (INGV), conducted successful tests of prototype, low-cost sensors for monitoring gas emissions at active volcanoes. Together they deployed the sensors at the Campi Flegrei volcano, which is currently in unrest on the western edge of Naples in southern Italy. The tests confirmed that the recording capability of the sensors is comparable with that of conventional sensors that are several times more expensive. 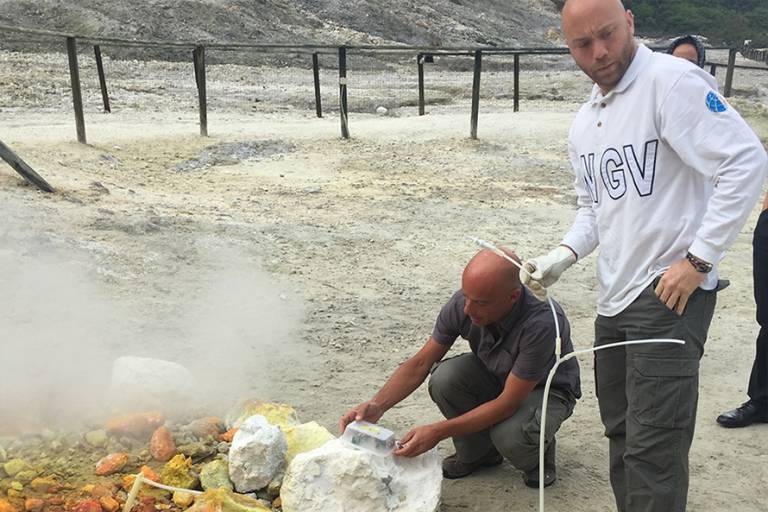 Highlighting their potential impact, Dr Kilburn said: “The sensors will facilitate independent monitoring of active volcanoes by dedicated volcano observatories around the world. Furthermore, due to their efficiency and cost-effectiveness, they have the potential to be deployed in Developing Nations, where most of the world’s active volcanoes are found and where funding has thus far been insufficient to permit continuous monitoring with conventional instruments.”

The UCL Hazard Centre team presented their findings at the 'Cities on Volcanoes' conference in Puerto Varas, Chile, 2016.  They presented their research on pre-eruptive unrest at Campi Flegrei, Southern Italy, identifying the locations of future eruptions within large calderas and affordable technology for monitoring remote volcanoes. The team is in the process of raising funds for full development and testing of the sensors.

Lara Smale, our PhD student,who is working on the control of hydrothermal systems on eruption precursors at large volcanic calderas, joined the INGV in field-testing sensors designed to record volcanic CO2 concentrations at the active degassing site of Solfatara. Variations in the flux of this gas can signal the arrival of new magma at shallow levels or disturbances in a hydrothermal system. The results established the potential of the sensors for improving monitoring coverage. Future development can include the addition of a GPS module, a radio transmitter and further sensors for recording a suite of physico-chemical parameters.