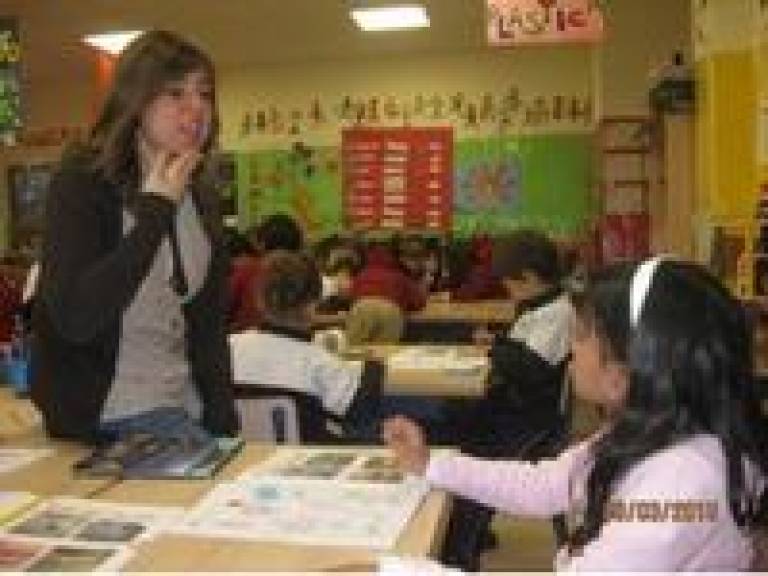 Across the world most children born today will grow up in bilingual or multi-lingual environments. These children will use two or more languages regularly. One language might be for home, and another for school; or parents might have different linguistic backgrounds. In London and other major cities classrooms are increasingly multilingual. The internet and TV also offer the opportunity for children to learn and absorb new languages. In the past it was thought that early exposure to two languages was confusing for children. But newer research tells us this is not so, and that there are clear cognitive and educational advantages to being bilingual, such as more being able to divide attention between different tasks or understanding the communicative intent of a speaker.

On Wednesday 2 November 2011, DCAL hosted an afternoon event of presentations and discussion on bilingualism. The event was part of the Economic and Social Research Council's (ESRC) annual Festival of Social Science. The presentations related specifically to bilingualism in signed and spoken language, but there was also an opportunity for people to think about bilingualism and culture and education.
DCAL deputy director Professor Gary Morgan from City University London, who introduced the event, describes the context: "Deaf children learning English and BSL are bilinguals. We have demonstrated in several areas of our research that these two languages support each other in cognitive, literacy and meta-linguistic development. Currently bilingualism research is showing real advantages for hearing children's development, but bilingual education (English and BSL) for deaf children is on the decline. We wanted to address this issue in an ESRC event as it is not Science but instead Economics that appears to be behind the changes to provision of educational opportunities for deaf children."

Held at University College London (UCL), the event attracted a good mix of academics, general public and professionals working on practical aspects around bilingualism. There were four speakers whose presentations overlapped well, taking the audience through a range of evidence based issues, with plenty of time for audience participation and discussion.

Two languages in one brain

The first presentation was from Professor of Developmental Linguistics at University of Edinburgh, Antonella Sorace, and titled "Two languages in one brain: why bilingualism is an investment for life". In her talk Antonella described some of the research looking at why bilingualism offers advantages for children as well as dispelling some of the myths that surround children learning two languages simultaneously. Children who use two languages seem to be able to get to grips faster with some of the key concepts related to how we understand the world than those who only use one language. More on Antonella's work and that of her University of Edinburgh research colleagues is available at the web-based information and consultancy service Bilingualism Matters. Antonella founded this site to bridge the gap between researchers and the community (bilingual families, educators, and policy makers) in order to enable more and more children to benefit from bilingualism.

The following presentation was given by Jane Thomas, who is a Specialist Speech and Language Therapist (SALT). Jane is one of the Project Directors of the Life and Deaf Association that has been using poetry as a way of working with Deaf children.  Her presentation, "Exploring identity through poetry" discussed this inspirational project which aims to develop Deaf children's self-esteem and communication in signed, spoken and written languages.

In Speech and Language Therapy sessions, the children explored their feelings about their Deaf identity. They created mindmaps from brainstorms, explored poetry about identity in different cultures, developed their vocabulary of emotions and wrote their own unique poetry. As the project developed, the Deaf children worked with Deaf poets, Deaf instructors and actors, to translate their written poetry into BSL and learn to perform confidently and professionally. They then worked with designers, photographers, film-makers and editors (both deaf and hearing) to create a beautiful book and a DVD of their BSL poetry.

The last presentation of the afternoon was by Mar Perez from the Special Education Services in Madrid, titled "Sign bilingual education in the Community of Madrid". This work is being carried out in collaboration with DCAL's Gary Morgan. Mar talked about a project they have been working on together for the last two years looking at how to develop assessments and evaluations of language and cognitive development in Spanish deaf children. Research at DCAL on sign language assessments are providing an evidence base for similar work in Spain. The work also involves Marian Valmaseda in Madrid and Dr. Ros Herman of City University London.

The feedback from the afternoon was very positive, with fascinating presentations and an engaged audience. DCAL looks forwards to holding similar events in the future. Check DCAL's website for news of events and opportunities. Alternatively sign up to be added to DCAL's mailing list for publications, press releases and announcements.

This classroom photo shows a hearing teacher using Spanish Sign Language to explain a mathematics problem to a hearing child. In other parts of the classroom there are deaf children working. 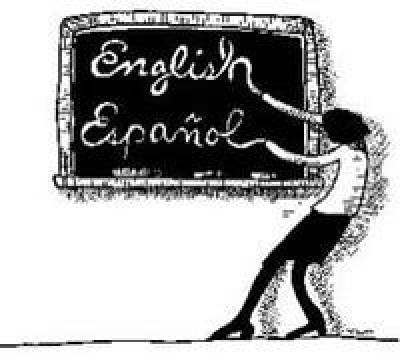