In the press, at the podium 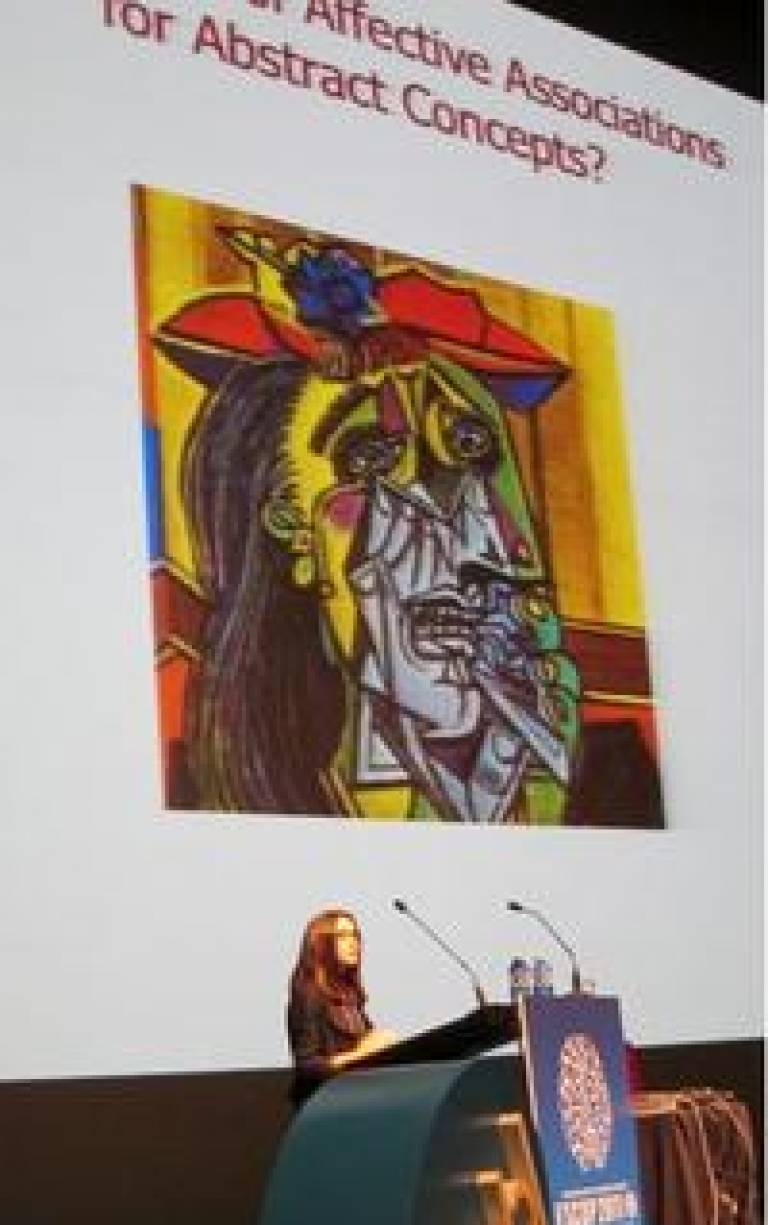 DCAL Co-Director Professor Gabriella Vigliocco, who is also Professor of the Psychology of Language in the Department of Cognitive, Perceptual and Brain Sciences at University College London, and Director of the Language and Cognition Laboratory at University College London, has been able to take her research work on iconicity and embodiment in language to a wide range of audiences over several months - to international academic audiences at a number of conferences and to the wider community via contributing to a fascinating article in New Scientist magazine published in August 2011 by David Robson, Biology Features Editor. The idea for the article came about after he read the paper by Pamela Perniss, Robin Thompson and Gabriella Vigliocco, published in Frontiers in Psychology (2010) discussing iconicity in signed and spoken languages.

Broadly, iconicity is the conceived similarity between the form of a sign (linguistic or otherwise) and its meaning. The New Scientist piece brings this concept to life with its reference to Lewis Carroll's Through the Looking Glass, quoting the passage where Alice and the enormous egg-shaped Humpty Dumpty meet. In response to Alice's questioning Humpty Dumpty's assertion that a name must mean something, he replies "Of course it must….My name means the shape I am - and a good handsome shape it is, too. With a name like yours, you might be any shape, almost."

A journey through the history of linguistics

The article starts out by briefly tracing the long history in the study of linguistics in which so many have held the assumption that "words are just collections of sounds - an agreed acoustic representation that has little to do with their actual meaning". It then goes on to discuss the intriguing findings of various individuals over the centuries who went against received wisdom, suggesting rather that humans seem instinctively to link certain sounds with particular sensory perceptions. In particular Robson cites the pioneering research (1929) of German psychologist Wolfgang Kohler whose work asking people to label two meaningless shapes - one spiky and the other curved as either takete or baluba - provided a turning point (most DCAL Newsletter readers will no doubt also choose takete for the spiky shape and baluba for the curvy one). The author quotes Gabriella when reflecting on how Kohler's findings attracted little attention, and that although others returned to the subject every now and then, the findings were not taken seriously by the mainstream.

The rest of the article explores what David Robson terms a "spate" of research around iconicity and related areas that has taken place since 2000. This research as a whole suggests "some words really do evoke Humpty's 'handsome' rotundity. Others might bring to mind a spiky appearance, a bitter taste, or a sense of swift movement. And when you know where to look, these patterns crop up surprisingly often, allowing a monoglot English speaker to understand more Swahili or Japanese than you might imagine."

Robson debates whether this combined research evidence makes a strong enough case that sound symbolism pervades human language, whilst he also acknowledges that big questions remain. In his article he roams around the research findings - how humans link certain sounds to certain shapes, or to flavours and styles of movement; and considers how sound symbolism could shed light on the origins of language: "while there's good reason to believe that humans first developed the neural toolkit for language through hand gestures, for example, how did we make the transition to the spoken word?"

The whole New Scientist article is fascinating and must surely inspire readers to consider examples of iconicity in everyday life and in spoken languages, and ways in which our own senses respond to different words and concepts. For DCAL's Gabriella and her research team, the subject goes into deeper areas and to places where spoken language and sign language meet; given that in order to understand how language and cognition relate to each other we need to account for iconicity in both signed and spoken languages.

And so to Spain

On 30 September 2011 Gabriella Vigliocco spoke at the Symposium on Embodiment titled, "Where is Embodiment Going?", sponsored by the Association for Psychological Science (APS), at the European Society for Cognitive Psychology (ESCOP). The symposium was held at Donostia-San Sebastián, Spain. Gabriella was one of four speakers, together with Arthur Glenberg (Arizona State University, USA), Gün R Semin (Utrecht University, Netherlands) and Bernhard Hommel (Leiden University, Netherlands).

Briefly, embodiment is the idea that human cognition, including language, thinking and our social behaviour is grounded in the brain's and body's physiology. It represents a new theoretical direction for research that contrasts with previous views according to which human cognition was seen as fully separate from other brain's functions like perception and action. While it is quite intuitive to think that thinking about running may evoke in the mind sensations of actually running, as advocated by embodiment theory, it is far less intuitive to link abstract notions such as "culture", "religion" etc to bodily states.

In her presentation Gabriella discussed how abstract concepts can be embodied, arguing that they are grounded in our inner emotional states. Connecting abstract concepts with emotional states could play a key role in making abstract concepts learnable, given that these concepts are otherwise harder (because less familiar, harder to imagine and often with less well defined meanings) than concrete concepts. .
Gabriella focused on research carried out with David Vinson, Stavroula Kousta, from UCL and Stefano Cappa from San Raffaele, Milan, showing that abstract words tend to  have emotional associations far more often than concrete words and that this difference implies that abstract words recruit emotion systems in the brain more than concrete words.  In collaboration with Neil Fox, Daniel Roberts and David Vinson, she is continuing to investigate how embodiment applies to signed and spoken languages in projects sponsored by the ESRC and National Institute of Health, USA, linked to DCAL.

Gabriella believes that iconicity is central to embodiment because it is via iconic links that language may become connected to events in the world. Think of the child learning language: how does she know that the word "cat" in English refers to that furry animal? Perhaps the fact that the first label often used in spoken English is "meow" helps, given that "meow" sounds similar to the noise made by the animal.
The ESCOP conference, founded in 1985, is the foremost conference for Cognitive Sciences in Europe. It has been held bi-annually in different European countries since 1999. The September 2011 conference was attended by nearly 1,000 people, mainly from Europe, but also from a variety of other countries.

Gabriella sums up from a busy time taking her research to a varied audience as follows: "It is a great time to study language and cognition. Embodiment as thought of right now is too simplistic to explain how people think, but this theoretical framework is giving us new exciting directions for research, especially in sign language. This is exactly how progress is made in science."

More information is available on the symposium on the APS website.

Moreover, you may like to know that Gabriella will bring the issue of embodiment to an event (titled:" How the Body shapes the Mind") for the British Association of Science Festival of British Science, which will be held in Dundee, September 4-7th and which will include Gun Semin, Arthur Glenberg and Stefano Cappa as speakers.

Iconicity in the New Year

More or less at the time this newsletter is sent out to you, on 7 and 8 January 2012, a workshop organised by DCAL's Professor Gabriella Vigliocco and titled "WHAT IF... the study of language started from the investigation of signed, rather than spoken, languages?" will be taking place in the Psychology Building at University College London (UCL).  Sponsored by the Experimental Psychology Society (EPS) with further support from DCAL and the Cognitive, Perceptual and Brain Sciences (CPB) Research Department at UCL, more information will be made available after the event to all interested - either via a DCAL press release or in the next DCAL newsletter. However for those wishing to know more sooner, the best is to visit the workshop website:
In advance of the workshop, the overview is as follows:

Our understanding of the cognitive and neural underpinnings of language learning and processing has been highly influenced by the fact that empirical research and theoretical development has been based on spoken language. Since the 1970s, researchers have begun to recognise the importance of investigating signed languages in order to determine which aspects of language can be considered to be universal and which, instead, ought to be regarded as modality-specific. However, the study of sign languages has been driven in large part by the theoretical ideas developed for spoken languages. As a result, the general approach has been to assess when sign languages behave like spoken languages (supporting universals) and when they do not (supporting modality-specific features of language).

This workshop sets to challenge this approach by asking whether the traditional theoretical ideas about language that have been developed so far would, in fact, have played a central role in our thinking if we had started the investigation of language based on visual, rather than acoustic, systems.  In order to make this very broad issue tractable, we plan to focus on two separate but related areas, both of which have begun to receive attention: iconicity and multiple channels of communication (especially the integration of manual and oral/mouth actions).

A snapshot insight into the work of DCAL's Professor Gabriella Vigliocco

I lead a team composed of psychologists, sign linguists, computer scientists and cognitive neuroscientists sharing the vision that understanding language and cognition requires integration of multiple levels of analysis and methodological approaches.
The overarching goal of our work is understanding how language and other aspects of cognitive functioning relate to each other.
Over the years, we have contributed to the understanding of how we represent meaning, how cognition shapes language and how language shapes cognition. We have challenged many traditional ideas about language, such as the notion that language is a modular and purely symbolic system that does not entail direct links with our sensory-motor and affective experience. We have developed theoretical and computational models of how meaning is represented and how sentences are produced that account for language performance in terms of interactions among different types of linguistic and non-linguistic information.