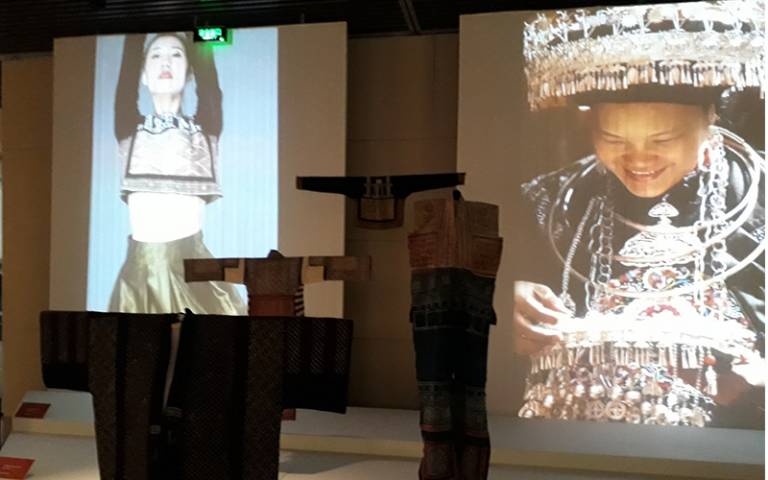 This virtual seminar will feature Dr Luo Pan, the lead curator of the Chinese National Museum of Ethnology in Beijing in dialogue with David Francis and Lisheng Zhang of the Institute at Archaeology at UCL. They will be discussing the development of museum exhibitions in China and its relationship to the Creative Economy as part of the AHRC-Newton funded Craft China project.

Craft China is a research project conducted in partnership between the Institute of Archaeology at UCL and the Chinese National Museum of Ethnology (CNME), which explores the remaking of traditional crafts and ethnic heritage in China’s creative economy. Since 2015 China has witnessed a shift in governmental policy towards traditional craft heritage. Rather than freezing traditional crafts through preservation as Intangible Cultural Heritage, operating under the mantra of ‘sell to save’ crafts have been encouraged to adapt and evolve so that they can find a customer base. This is part of a wider economic movement within China government centered around Wenchuang (the Creative Economy), which has seen a self-conscious rebranding of the country’s industrial strategy: from ‘made in China’ to ‘created in China.’
For China’s fifty-six officially recognised ethnic groups, crafts have traditionally functioned as a mingpian (business card) and played an important role in ethnic heritage tourism. The presentation of ethnic heritage in museums and sites across China has been criticised for being based on discredited narratives of social evolution, for being overly Han centric and for presenting ethnic groups as ‘fixed and enduring facts’ unchanging in history (Macdonald 2017).
For the Chinese National Museum of Ethnology – a museum with a collection but that lacks a building – the chance to participate in the creative economy offers both an opportunity for economic but also interpretative autonomy from government control. In 2018 the CNME is launching a three-year project ‘China Craft’, which will focus on a selection of traditional crafts to reflect the potential role heritage and design can play in developing the ‘cultural innovation’ industries, and how it can contribute to the wellbeing and economic sustainability of local communities, particularly in rural areas.
Reversing China Craft to ‘Craft China’, we seek to critically understand the connotations of ‘craft’ as an adjective. Opposed to the mass-produced, cheap and fast, ‘craft’ indicates ‘quality’, ‘tradition’ ‘originality, things made with care and patience that stand the test of time. The appeal of ‘craftiness’ and ‘craftsmanship’ in China is associated with an expanding social appreciation of, or desire for, ‘artistic and aesthetic value or taste’ (Fang and Macdonalds) in society and hence the market, resulting in its proliferation in the urban renovation and gentrification process. In this context, what would a ‘craft China’ mean? Is a ‘Craft China’, one that features finely renovated heritage and ‘good taste’, what the heritage industry and cultural-policy makers would like to build?

“Joining information for this event will be sent to attendees a few days before the event.

Should you have any questions, or wish to RSVP without using Eventbrite, please email criticalheritage@ucl.ac.uk

David Francis is a post-doctoral researcher based at the Institute of Archaeology at UCL, London. As part of the AHRC-Newton funded project Craft China: (Re)making ethnic heritage in China’s creative economy, he is interested in using the exhibition-making process to explore the concepts of craft, creativity, and criticality. Alongside this two-year project, David regularly creates exhibitions at the British Museum as an interpretation consultant.

Lisheng Zhang is a postdoctoral researcher for the UK-China collaborative project Craft China: (Re)making ethnic heritage in China's creative economy. His PhD, undertaken at the UCL Institute of Archaeology, investigates the Chinese private heritage entrepreneurship through an ethnographic case study of the Jianchuan Museum Complex, China’s most high-profile nonstate museum. His current research interests include the appreciation and heritagisation of the shakuhachi, a Chinese-Japanese Zen Buddhist music instrument, in contemporary China.

Luo Pan received her doctoral degree in 2011 from The Chinese University of Hong Kong, Hong Kong SAR, anthropology major. From 2014 till now, she works as an assistant researcher in the Department of Research, The Chinese National Museum of Ethnology.