The Science of Space Weather

‘Nothing is more important to us on Earth than the Sun. Without the Sun's heat and light, the Earth would be a lifeless ball of ice-coated rock…’ NASA 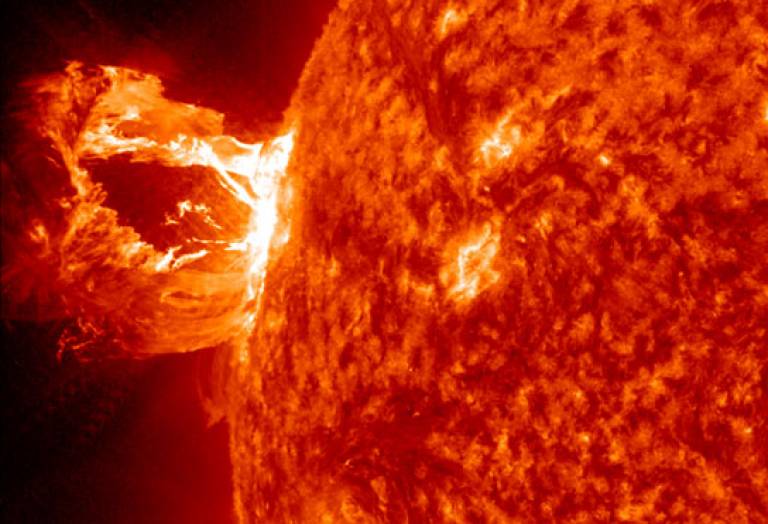 Essentially, the Sun is responsible for all life on Earth.  At a personal level, safe exposure to the sun can have a positive impact on everything from raising our mood and levels of Vitamin D to lowering our blood pressure.

The consequences of being close to a dynamic star

Even though the Sun is approximately 150 million km from Earth, a solar flare - bursts of electromagnetic radiation including radio waves, ultraviolet waves and X-rays that travel at the speed of light – will take just 8 minutes and 20 seconds to get to us.

So the eruptions and explosions it produces can have a very real effect on us. They create stormy conditions known as ‘space weather’ and this natural hazard can severely disrupt the technologies we now take for granted in our electronically-driven society.

There have been a number of very large and damaging space weather geomagnetic storms.

In 1989, during a geomagnetic storm, Canada’s Hydro-Québec electricity grid closed down and power was lost for nine hours. Six million people were affected and there was significant knock-on economic cost.  In October 2003, a geomagnetic storm knocked out a part of the high‐voltage power transmission system in southern Sweden. The blackout lasted for an hour and left about 50,000 customers without electricity. It was also estimated that 10% of the planet’s entire satellite fleet suffered some sort of anomaly or malfunction.

A recent study by the European Space Agency (ESA) estimated the potential socio-economic impact of a single, extreme space weather event in Europe could be €15 billion.

However, much of the disruption caused by space weather could be avoided through better understanding of these phenomena and more accurate forecasting and modeling. Which is why a joint project by UCL and the Met Office – called the Science of Space Weather training programme – was launched.

UCL - no strangers to space weather

Researchers and engineers at UCL’s Department of Space and Climate Physics at the Mullard Space Science Laboratory (MSSL) have been at the heart of the UK space programme since its foundation in the 1960s, and have been working in the area of space weather for many years.

The work has included studying the science of the way the Sun affects the Earth and its technical systems, as well as building space telescopes that are used to carry out this research.

The collective effort of staff at UCL and across the UK has already led to two important milestones. In 2011, space weather was included and ranked as the fifth most important civic risk in the latest UK National Risk Register. And the Met Office Space Weather Operations Centre (MOSWOC) was established in 2014, which remains one of only three centres around the world manned 24/7 by expert space weather forecasters.

The benefits of a two-way collaboration

A team from UCL MSSL - led by Royal Society University Research Fellow Prof. Lucie Green - is working with the MOSWOC to aid them in their interpretation and use of solar data to improve space weather forecasting.

Lucie comments, ‘This programme made absolute sense because we and MOSWOC already have aligned interests, shared goals and complementary expertise. The benefits for us at UCL include a better understanding of the methods used to forecast space weather, meaning we can direct our research toward the pertinent areas for development. What’s more, this collaboration has led to the inclusion of space weather in student training programmes on risk and disaster management, targeted research projects and proposals and the development of a space weather satellite.’

Keeping key systems up and running

Lucie added, ‘This work is vitally important to a range of key sectors in our economy, from finance and insurance to power utilities and satellite communications. Space weather events can have a detrimental impact on so many technologies that we today take for granted. These stretch from energy supplies and global navigation services to the kind of radio waves our emergency services, aviation and shipping operations rely on. Continuity is crucial and any loss of systemically important operations can have a serious knock-on effect to the UK economy and beyond.’

Mark Seltzer, Senior Operational Meteorologist and Lead Space Weather Adviser at MOSWOC commented, ‘The Science of Space Weather training programme has proven to be an invaluable two-way partnership. UCL provides our forecasters with a better understanding of the science of space weather and we provide them with genuine 24/7/365 real-time observation. In the last seven years the Met Office has transitioned from an organisation not involved in space weather to becoming genuinely influential globally in this important field. Our collaboration with UCL has helped that transition immeasurably.’

Lucie concluded, ‘Our work with MOSWOC means we are much better positioned to educate key people in the industry sectors most likely to be impacted by space weather. We can help ensure they are better prepared and have the right contingency plans in place to cope with adverse space weather events.’