The Governance of Parliament

A controversy over select committee appointments in 2001, and others regarding the way in which the House of Commons governs itself, raised questions about whether some responsibilities should be taken out of the hands of the party whips, and given to a more independent parliamentary body. These included concerns about the extent to which government controls the parliamentary timetable. This project investigated the extent to which the House of Commons has control over its own business and procedures, and whether there were practices used in other parliaments which could help it to gain greater independence.

We particularly focused on the roles of the central individuals and bodies in parliaments, and how their powers are distributed. These included Speakers, House Leaders, Whips and 'Business Committees'. Our comparators were the House of Lords, the Scottish Parliament, the German Bundestag, the New Zealand Parliament, and the House of Representatives and Senate in Australia. Our main interests concerned who was responsible for setting the parliamentary agenda, controlling how committee memberships are decided, and how reform reaches the agenda, plus how other key positions in parliament are filled, how budgets are set and who (if anyone) speaks for the backbenches. The main output was a report, published at the end of 2007 (see below).

In August 2006 the project produced a briefing examining the case for a cross-party House of Commons business committee with powers over the parliamentary timetable and appointments to other committees. This assessed the performance of existing business committees in Scotland, Germany, New Zealand and Australia and sought to draw lessons for potential reform at Westminster. To view this publication, click here.

The final project report was published on 16 October 2007 at a launch event in the House of Commons entitled The House Rules? International lessons for enhancing the autonomy of the House of Commons, it set out a detailed agenda for reform that would grant backbench MPs and committees greater control over how the Commons is run. You can read the report here. 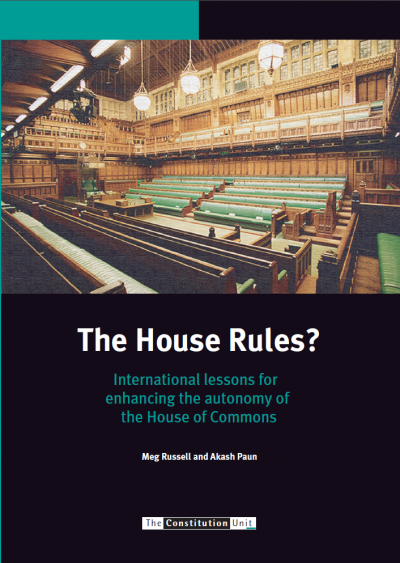 The report made a total of 60 recommendations. One central recommendation was that a new category of House of Commons business should be created, under the control of a new "Backbench Business Committee" rather than the government, or opposition parties, to debate matters chosen collectively by backbench members. The report expressed scepticism about the effectiveness of a more all-embracing "House Business Committee" for scheduling government business, on the basis that this would probably in practice be controlled by party whips. Among its other recommendations were the idea that the weekly "business statement" presented by the Leader of the House should be published in advance, and be amendable and formally voted on. Also that the House of Commons Speaker should be a more public "voice for parliament", and that the method of choosing select committee members should be reformed.

The project report was extremely influential. In the aftermath of the MPs' expenses crisis in 2009 the Select Committee on Reform of the House of Commons (often referred to as the 'Wright committee', after its chair Tony Wright) was established, and used to the report to an extent as a blueprint. Tony Wright had been an adviser to the project, and the report's author, Meg Russell, was in turn appointed as a specialist adviser to his committee. The committee's report endorsed many of the original report's recommendations, particularly including establishment of a Backbench Business Committee (which was put into effect in 2010, see here), and the proposal that the weekly business statement, setting out the government's proposals for debate, should be amendable and "voteable" (which has yet to be acted upon). The committee also recommended the election of select committee members and chairs, which was a different proposal to that in our research report, but consistent with its aims - this change was likewise implemented in 2010.

This project was subsequently chosen as an example of UCL research having an important impact on public life. See here.