In Britain, the House of Commons has primacy over the House of Lords in all legislation relating to taxation and public spending. This has a number of important consequences for how parliament operates today, the best known of which is that legislation certified as a 'money bill' (because it relates solely to expenditure or taxation) can be delayed only minimally by the House of Lords before becoming law.

This project examined another manifestation of the Commons' financial primacy, concerning Lords amendments to legislation, which is less well known or understood. In the event that the Lords passes a legislative amendment with financial implications that the Commons subsequently disagrees with, the Commons can invoke 'financial privilege' and the Lords by convention does not then insist on its amendment. Although not new to the coalition government, controversy about the use of financial privilege grew during the 2010-15 parliament. Most notably, the invocation of financial privilege on the Welfare Reform Bill in 2012 provoked claims from some that the Lords was being inappropriately prevented from scrutinising government legislation. Such concerns may well re-emerge in the future, particularly if peers seek to limit government spending cuts.

This research was based around detailed, original analysis of how financial privilege was used between 1974 and 2013, as well as consideration of how such matters are dealt with in comparable legislatures abroad. The resulting report, Demystifying Financial Privilege, clarified the existing rules and procedures surrounding financial privilege, as well as making recommendations for how arrangements might be reformed. 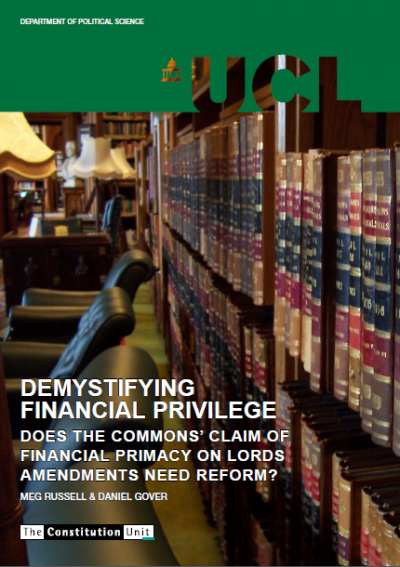 At Westminster the House of Commons has primacy over the House of Lords on most matters, and this applies particularly with respect to finance. Notably if the Lords passes an amendment that could affect taxation or spending, MPs may reject it citing the Commons' "financial privilege"; convention then suggests that the Lords should not insist on the amendment. Recent claims of financial privilege - most prominently on the Welfare Reform Bill in 2012 - revealed significant confusion about this procedure, and led to allegations that it had somehow been abused by government to unfairly deflect opposition. This report clarifies how financial privilege operates, and carefully evaluates the complaints that have been made against it. Built on this analysis, plus some consideration of arrangements in overseas legislatures, it offers recommendations for how arrangements at Westminster could be improved.

Note: This material was first published by Thomson Reuters Professional (UK) Limited in Daniel Gover & Meg Russell, 'The House of Commons' "financial privilege" on Lords amendments: perceived problems and possible solutions', Public Law (2015, No1), 12-22, and is reproduced by agreement with the Publishers.