Enough is Enough: Regulating Prime Ministerial Appointments to the Lords 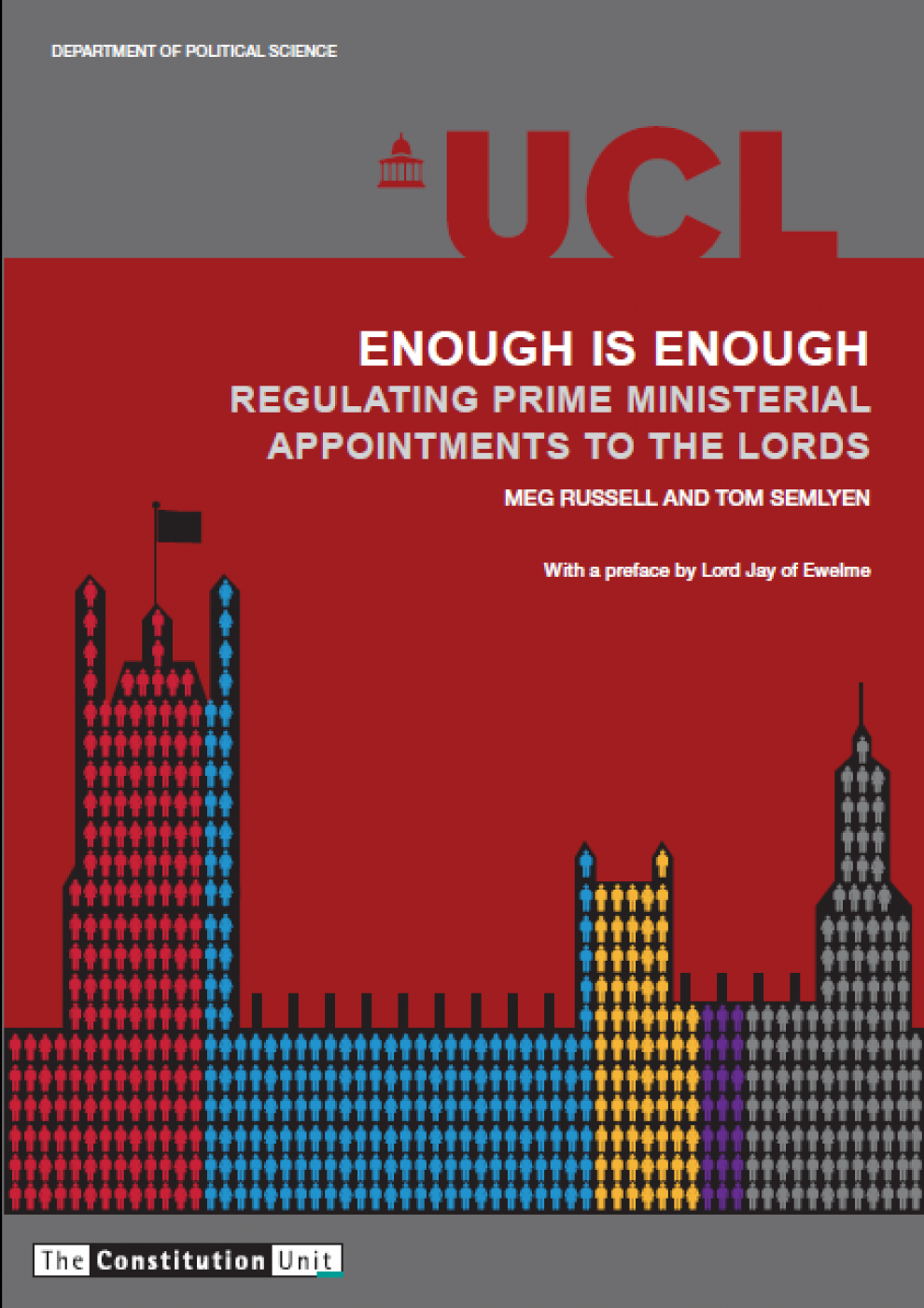 Since 2010 increasingly urgent concerns have been raised about the size of the House of Lords. With around 850 potentially eligible members, the chamber has grown by a third since 1999. Thus far debates have focused primarily on routes OUT of the chamber - for example via the 'Steel bill' (now the House of Lords Reform Act 2014) allowing peers to retire. But without limiting the way INTO the chamber, its size cannot be brought under control. Successive parliamentary committees have thus called for an agreed formula setting out how new appointments should be shared between the parties. But to date, no detailed work has been done on the options for such a formula. This new report from the Constitution Unit - supported also by the Hansard Society and the Constitution Society - does the detailed work. By modelling the effects of three possible appointment formulae across three different electoral scenarios (encompassing small, medium and large changes in party support) it demonstrates how the formula in the coalition agreement of achieving proportionality across the chamber creates unsustainable upward pressure on size. But it also shows that an alternative formula for ensuring fairness between the parties exists which can allow the size of the chamber to be managed down. The report makes firm recommendations for change, emphasising that it would be irresponsible for the Prime Minister post-May 2015 to continue with the current unregulated system. Whether or not larger-scale Lords reform proceeds in the next parliament, there is an immediate need to get a grip on Lords appointments. This report sets out how to do it.

The report was launched on 9th February 2015 with Baroness Hayman (former Lord Speaker) chairing a debate on its findings. Speakers included: Professor Meg Russell (lead author of the report), Lord Jay of Ewelme (former chair of the House of Lords Appointments Commission), Lord Grocott (former Labour Chief Whip) and Jesse Norman MP (Conservative). See below for comments by the speakers.

Comments about the report

" Lord Grocott, Lords Chief Whip 2002-08, argued for "the Appointments Commission deciding on the frequency of new batches of appointments and deciding on the overall numbers" because the size of the House of Lords is now "verging on the ridiculous and it needs to be dealt with".

" Peter Riddell, Director, Institute for Government "This report makes a powerful, convincing and evidence backed case for urgent action by the Prime Minister to adopt a new approach to appointing peers which will be fairer between the parties and permit a much needed gradual reduction in the size of the House of Lords."

" Andrew Blick, of King's College London and The Constitution Society, said "this report addresses what is potentially a major dysfunction at the heart of our constitution, likely before long to become too serious to ignore".

This publication is supported by:

The evolution of MPs’ staffing arrangements: how did we get here?