The Constitution Unit publishes a new report examining the future of power-sharing government in Northern Ireland. 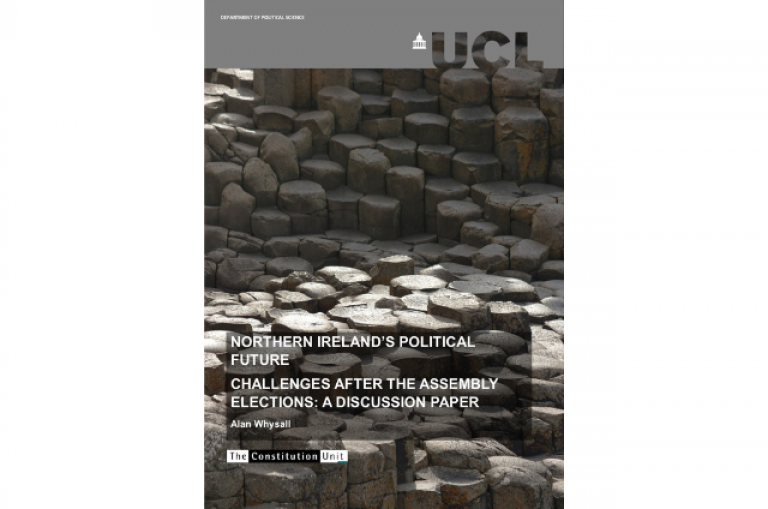 The Constitution Unit has today published a major new report on the future governance of Northern Ireland. It asks whether and how the power-sharing arrangements that have sustained peace and progress in Northern Ireland for almost a quarter of a century can survive – and who must step up to ensure that it does so.

The report comes at a crucial time. Northern Ireland’s voters went to the polls yesterday to elect a new Assembly, and the results will be known imminently. Negotiations to form a new government will follow, which will raise essential questions about how – indeed, whether – power-sharing government can continue.

The report – which takes the form of a discussion paper – asks whether the 1998 Belfast/Good Friday Agreement is still the template for stable government in Northern Ireland. It argues that there is no other plausible framework for constructive politics, but that the Agreement needs renewal.

Through detailed analysis, it argues that attention will be needed in the coming months not just to re-establishing the Executive, but also to ensuring that power-sharing government delivers – its performance so far has been patchy. The underpinnings of the Agreement also need to be rejuvenated, as do efforts to reduce sectarian division and ensure that politics is free of paramilitary influence.

The report also examines the responsibilities of different actors. It particularly highlights the role of the government in London. British and Irish governments used to work closely together to forge political compromise in Northern Ireland, but London in the last two years has been engaged chiefly in battles with Brussels over the Protocol. Polling suggests that it is universally mistrusted in Northern Ireland.

Civic society has also at times played an essential role in Northern Ireland in ensuring that politics succeeds, and it may need to do so again now.

‘We may now be facing a very difficult negotiation over restored devolved government that exposes fault lines in the 1998 settlement. But at present there is no other basis for constructive politics, and the aim has to be renewal of the Agreement.

Political crisis has led to political advance before, but that requires everyone to play their part. In particular London, which in the last couple of years has taken a very different role from previous governments; and civic society in Northern Ireland, which may be needed to provide new ideas, and new impetus.’

This paper aims to be accessible to all audiences, including those who know a great deal about Northern Ireland, and – with the crucial London role in mind – those who do not.