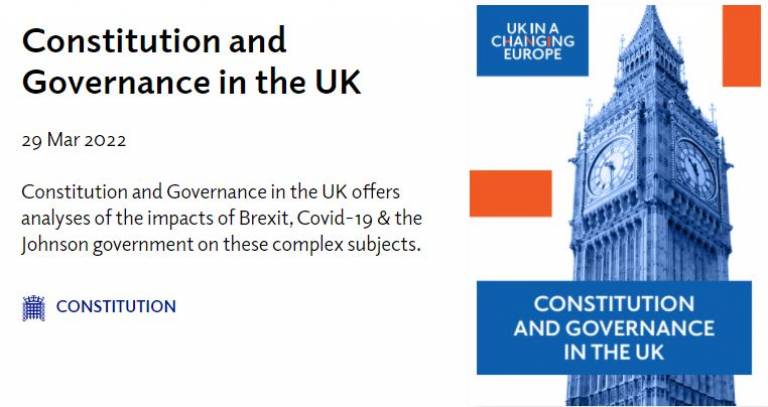 A new report evaluating the Constitution and Governance in the UK published by UK in a Changing Europe features three chapters by the Constitution Unit’s Meg Russell, Alan Renwick and Lisa James respectively. They join 39 other leading scholars across the UK in analysing the impact of Brexit, Covid-19 and the Johnson government on constitutional and governance arrangements.

Professor Meg Russell's chapter, on government and parliament, begins with the uniquely confrontational relationship which emerged in the aftermath of the Brexit result. These tensions, she argues, resulted from the “perfect storm” of a divided parliament with a majority opposed to the Brexit decision, minority government post-2017, and a divided Conservative Party. The resultant tendency to avoid parliamentary scrutiny was then compounded by the rush to emergency legislation during the Covid-19 pandemic. Parliament was unable to operate normally and the emergence of new backbench groups to pressure government into providing greater scrutiny over Covid legislation, as well as the lack of physical contact between MPs, led to a fragmented parliament.

Boris Johnson may be a more jovial and socially adept politician than Theresa May, but he is even less inclined to open, consultative policy making, and clearly views the usual requirements for parliamentary and wider scrutiny as an unwelcome chore. - Professor Meg Russell

Lisa James’ chapter on public appointments notes the practical impacts of Brexit and the Covid pandemic, and highlights. various controversial developments under the Johnson government. The proposed appointments of figures close to the government as the chairs of Ofcom and the BBC  provoked particular anxiety that the government might seek to undermine the integrity of the appointments system. Further concerns have been raised about the packing of appointment panels and key Whitehall governance roles with political allies. As a result, watchdogs have increasingly questioned the sustainability of the current public appointments system.

Despite the impacts of Brexit and the pandemic, the most serious concerns have focused on the Johnson government’s attitude to public appointments; critics, including independent regulators, have raised increasing concerns about the government’s apparent willingness to subvert the appointments process to appoint its allies to key roles. - Lisa James

Professor Alan Renwick’s chapter on the electoral process notes that Brexit has had some effects, changing the franchise and also ending elections to the European Parliament – where the system of proportional representation could boost smaller political parties. The Covid pandemic, meanwhile, is likely to have only limited long-term effects. The Johnson government’s own agenda, however could bring major changes. Most notably, some of the proposals in the Elections Bill, which is currently before parliament, could harm electoral integrity. Tighter constraints on the Electoral Commission risk damaging the regulator’s vital independence. And there are widespread concerns about plans to require voters to show ID at polling stations.

By contrast, the Johnson government’s own approach could have profound implications for electoral law and the integrity of elections in the UK. Across multiple domains, the government has acted in ways that weaken longstanding checks and balances on executive power. - Professor Alan Renwick

The report considers the impact of Brexit, the Covid pandemic and the Johnson government on parliament, Cabinet, the civil service, the courts, judicial review and the rule of law, devolution and elections.