Press Release: A second referendum would take around 5 months, not a year 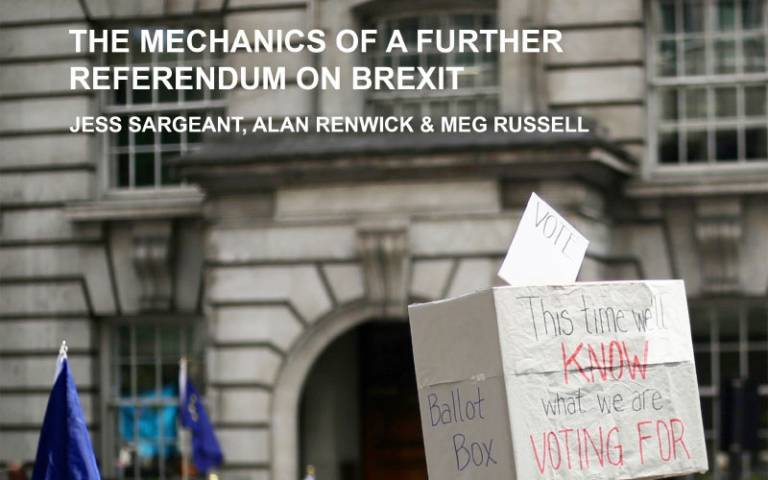 A government paper leaked to the media (Telegraph 17 January 2019) suggests that it would take more than a year to hold a second referendum on Brexit.

Experts at the UCL Constitution Unit calculate that a referendum need not take so long. In a detailed report, ‘Mechanics of a Further Referendum on Brexit’, published in October 2018, they conclude:

It would be possible to complete the process in around 22 weeks, assuming majority support in parliament for a referendum was clear and the referendum took broadly the same form as past referendums. This timeframe would allow for:

The report finds that those who claim a referendum could be held in a matter of just a few weeks are misguided.

A referendum could also require longer than 22 weeks (though still much less than 12 months), particularly if it took an innovative form such as a three-option question. Further information on the question format are available in the full report.

Other key points highlighted in the report include, that:

Dr Alan Renwick, Deputy Director of the Constitution Unit and co-author of the report, says:

“Honesty is needed from both sides in the debate about a possible second referendum. Holding such a vote before 29 March is no longer feasible, so it could take place only if the Article 50 period were extended. But a referendum certainly need not take a whole year. Five months is a reasonable estimate, meaning the earliest realistic date is now in late June.”

UCL Constitution Unit’s report, The Mechanics of a Further Referendum on Brexit, was co-authored by Jess Sargeant, Alan Renwick and Meg Russell, and published in October 2018.

About the UCL Constitution Unit

The Constitution Unit is a research institute based within the Department of Political Science at University College London. It conducts timely, rigorous, independent research into constitutional change and the reform of political institutions. Its research has significant real-world impact, informing policy-makers engaged in such changes – both in the United Kingdom and around the world.

UCL was founded in 1826. We were the first English university established after Oxford and Cambridge, the first to open up university education to those previously excluded from it, and the first to provide systematic teaching of law, architecture and medicine. We are among the world's top universities, as reflected by performance in a range of international rankings and tables. UCL currently has over 39,000 students from 150 countries and over 12,500 staff.