NEW REPORT: Mechanics of a Further Referendum on Brexit Revisited

With another referendum potentially on the cards after the election, the Unit’s new report finds that, though it would not be without difficulties, a vote on Johnson’s deal may be the quickest option and the one most likely to command public legitimacy. 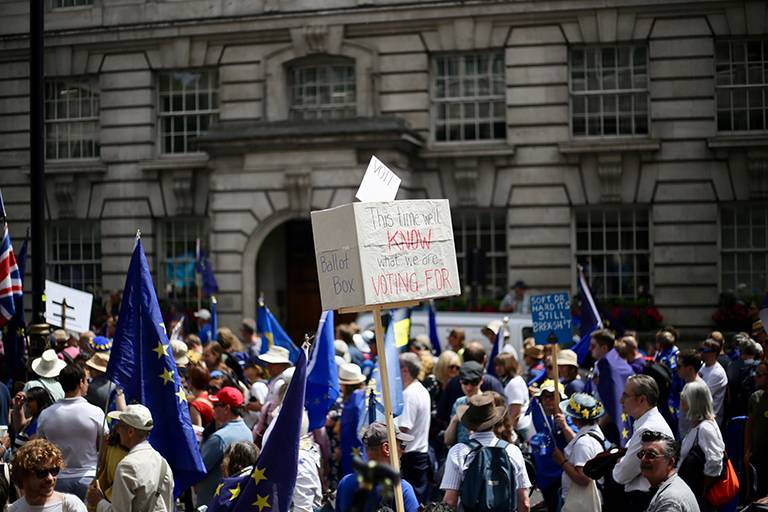 With another referendum potentially on the cards following the election, a public vote on Boris Johnson’s deal may be the quickest and most legitimate option, according to the Constitution Unit’s latest report.

The outcome of the general election cannot yet be known, but proposals for a further public vote on Brexit lie at the heart of many parties’ manifestos.

Jeremy Corbyn promises that a Labour government would ‘get Brexit sorted’ within six months, and Boris Johnson plans to reintroduce his Brexit deal to parliament by Christmas if the Conservatives win the general election. The Liberal Democrats pledge that, unless they win a majority and can enact their policy of revoking Article 50, they will ‘fight’ for a second referendum with the option to stay in the EU.

The Unit’s new report, The Mechanics of a Further Referendum on Brexit Revisited: Questions for the New Parliament, substantially updates previous analysis on this topic. It examines the scenarios under which a further referendum might come about, and considers the key questions which referendum advocates in parliament would face: what options should be put to voters, whether the result should be legally binding and how the vote should be run.

The Constitution Unit has no position on Brexit or on whether a further referendum should be held. But if a further vote is considered, it is critical that it is carefully planned, transparently conducted, and commands the maximum legitimacy. The new report seeks to inform debate on those issues.

‘If the post-election government seeks a referendum on Brexit, following a robust process will be crucial for ensuring the legitimacy of the vote.‘Our report outlines the key options for a referendum, including the questions that might appear on the ballot, whether to make the referendum result legally binding and how to update the rulebook in the age of digital campaigning. It also highlights the central role of broadcasters in fostering a fair campaign.’

‘The window of time necessary to deliver a referendum on Brexit will be tight for any incoming government, so it is crucial that all parties think through the mechanisms fast.

'Labour plans to renegotiate a new Brexit deal and legislate for a referendum within six months, should it win the election. Alternatively, Johnson might be forced to put his deal to a public vote in the event of a Conservative minority government. This form of referendum could be staged more quickly, and would maximise legitimacy among Brexit voters – so might even have some attractions for pro-referendum parties under a Labour government.’