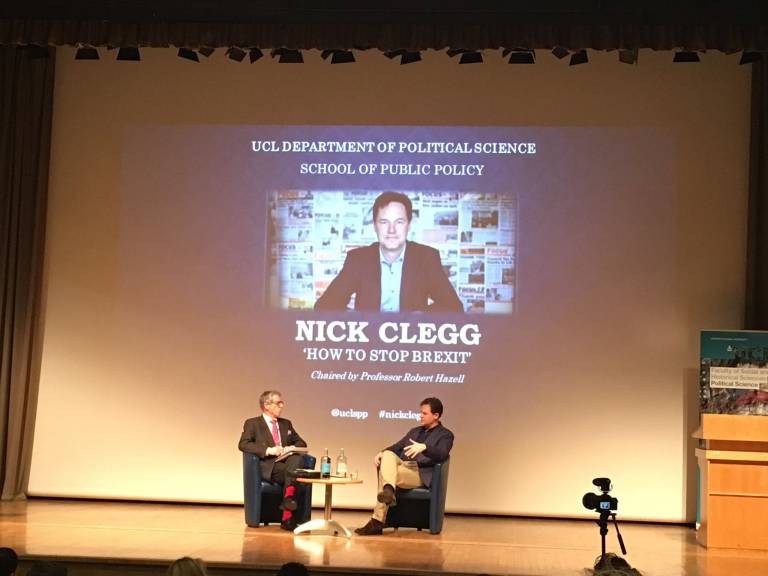 The School of Public Policy at UCL is proud to have hosted two big events on Brexit this term, one for and one against.

On 25 January Sir Nick Clegg gave a talk on 'How to stop Brexit', publicising his book with that title. To a packed audience he argued that it was not too late for the UK to change its course, and quoted David Davis saying 'If a democracy cannot change its mind, it ceases to be a democracy'. Younger people had voted predominantly to remain in the EU, but if they wanted that to happen, they would need to mobilise: in his book he set out a five point checklist on how to put pressure on the Labour Party and Conservative Party.

In an equally packed lecture theatre on 22 February, Professor Robert Tombs and Sir Richard Aikens explained the historian's and the lawyer's case for Brexit.

Robert Tombs (Professor of French history at Cambridge) said that the EU and the UK both stood at a historic juncture. President Macron had acknowledged that the EU faced an existential crisis, and had set out a bold vision in his Sorbonne speech for stronger EU control of finance, security, labour markets and more. It was an honest, coherent vision of a sovereign EU, but one which was likely to fail. But was this the kind of EU that the UK signed up for, or might want to rejoin? Because that was now the choice; the decision had been made to leave, in the 2016 referendum, followed by the vote in Parliament to authorise the triggering of Article 50. If subsequently the UK wanted to rejoin, it might have to become a full member of the EU, including joining the euro; or accept becoming a satellite member of an increasingly federalised Europe. Moreover, this would risk causing a major constitutional and political crisis in Britain.

> Read the talk by Robert Tombs

For further writing by Professor Tombs, and other academic experts who support Brexit, see the website of the new organisation he has founded, Briefings for Brexit.

Sir Richard Aikens QC, former Court of Appeal judge, based his support for Brexit on a careful reading of the EU Treaties. The Treaties had created economic and monetary union, and the euro. Despite the rejection of the proposed EU constitution in referendums in 2005, the Treaties in effect created a constitution for the EU. But the peoples of Europe had never been properly asked if they wanted a federal Europe. The EU had increasingly wide competences, which the Commission was likely to extend further. For the EU to be accepted as legitimate, it had to become more democratic.