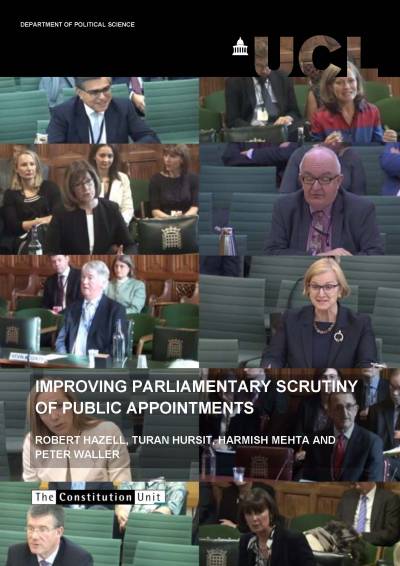 The Constitution Unit has today published a new study evaluating the impact of parliamentary scrutiny of public appointments. Since 2007 the most important senior public appointments have been open to scrutiny by departmental select committees. Committees tend to regard pre-appointment scrutiny as a bit of chore, but the Unit's research shows that it has real impact.

This new report, following a 2010 study of the first 20 hearings, is based on a detailed study of a further 71 pre-appointment hearings conducted between 2010 and 2016. It concludes that pre-appointment scrutiny has real value: candidates have not been appointed as a result, and others have been forced to resign, so select committees are far from toothless.

Professor Robert Hazell, lead author of the report, said: 'Following the Grimstone review in 2016, which gives ministers more scope for political patronage, pre-appointment scrutiny is all the more valuable. It is an important check on the integrity and effectiveness of senior public appointments, and a curb against ministers abusing their powers of patronage'.

The report recommends that committees should not be restricted by the Cabinet Office list of the 'top 50' public appointments, but set their own priorities. Following the example of the Treasury Committee, they can be more effective by being more selective but also more systematic in their approach to pre-appointment scrutiny.

About the authors of the report

Turan Hursit, Harmish Mehta and Qalid Mohamed are all lawyers who worked on this project as Research Volunteers at the Constitution Unit.

Peter Waller is an Honorary Senior Research Associate at the Constitution Unit, and a former senior civil servant.