New Report: The Process of Brexit 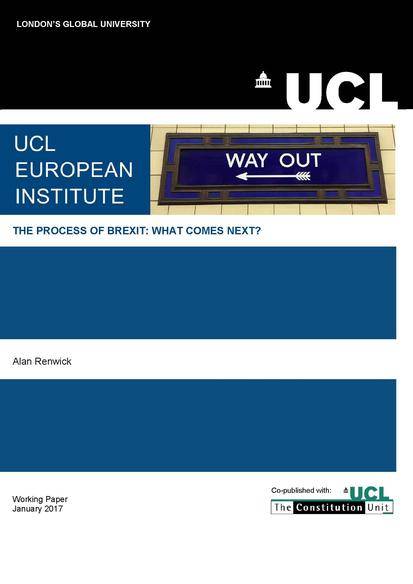 The phoney war around Brexit is almost over.  The Supreme Court ruled last week on how Article 50 can be triggered.  This week, parliament has begun to debate the necessary legislation and the government has published a White Paper setting out its objectives for the Brexit negotiations.  By the end of March - if the government gets its way - we will be entering a new phase in the process.The question is: What comes next?  What will the process of negotiating and agreeing the terms of Brexit actually involve?  Can the government deliver the wish list set out by the government in its White Paper?  What role might parliament play?  Can we expect the courts to intervene again?  Can the devolved administrations exert any leverage?  Is a second referendum at all likely and, if so, what form would it take? How will the EU approach the negotiations?

These and many other questions are examined in a new report published today jointly by the UCL Constitution Unit and UCL European Institute.  The report's author, Constitution Unit Deputy Director Dr Alan Renwick, sets out what we can know today about how the negotiations will be conducted, drawing on Article 50 and statements by key actors.  He analyses the roles that will be played by the executive, legislature, judiciary, devolved administrations, and general public in the UK, and what the UK can expect from its EU interlocutors.

He comments: 'Theresa May has set out an ambitious agenda for Brexit.  She hopes to secure a deal not only on divorce terms, but also on the nature of the UK's future relationship with the EU.  She wants that deal to be bespoke, encompassing a deep free trade agreement, a novel form of customs association, and ongoing cooperation in a wide variety of areas, including policing, security, and research.  And she wants all of this to be both negotiated and ratified within two years.  That looks very difficult to achieve.  The negotiations themselves will be immensely complex and difficult.  A deal such as the Prime Minister proposes will then have to be ratified by every member state.  As the troubles faced in the Walloon parliament by the Canadian free trade agreement show, there is no guarantee that ratification will be smooth.'

But what happens if a deal is not done in two years?  Will the time available be extended, will the UK crash out of the EU with no deal, or will some other way forward be found?

What if parliament votes against the deal?  Would that necessarily precipitate 'disorderly' Brexit, or could it lead the UK back to the negotiating table?  Would it be possible to revoke the triggering of Article 50 and remain within the EU after all? Might the matter be put to a second referendum?

Definitive answers are not possible to all such questions.  Drawing on extensive sources, however - including this week's parliamentary debates on the Article 50 bill and the text of the White Paper - the report sets out what we can reasonably say.