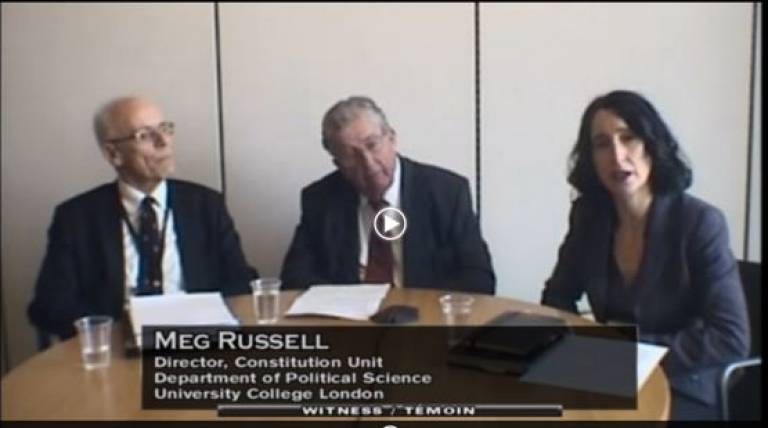 Constitution Unit director Professor Meg Russell has given invited oral evidence, for a second time, to the Canadian Senate Committee on Senate Modernization.

Appearing by live video link on Wednesday 5 April 2017, Professor Russell formed part of a three-person panel with senior Conservative peers Lord (John) Wakeham (who chaired the Royal Commission on the reform of the House of Lords) and Professor the Lord (Philip) Norton of Louth. The Senators wished to explore the relationship between the UK House of Lords and House of Commons in order to inform their deliberations about change in Canada, where the process for appointments to the Senate has recently been changed (as described on our blog here).

Professor Russell's previous appearance at the Senate committee in April 2016 (see here) concentrated on the likely impact of these changes, under which all appointees are independent of political party. This creates an obvious parallel with the Crossbenchers in the House of Lords.

In this session, the panel discussed the legislative process in the House of Lords and the interplay between the two chambers on policy. This included discussion of the importance of convention in the UK system, the de facto power and influence of the House of Lords, the importance of informal and off-the-record discussions between members of the two chambers (particularly within party groups) and between parliamentarians and ministers. The Senators were interested by the panel's discussion of the relative independent-mindedness of UK backbench MPs, and the role that the Lords can play in sparking, or resolving, disputes within the governing party. This appeared to be a clear contrast to the Canadian system. The House of Lords' public image and popularity was also discussed. Here Professor Russell commented that there is 'absolutely no denial that the House of Lords is a controversial institution', but that opinion polls show that the public have 'a kind of grudging respect' for the institution.