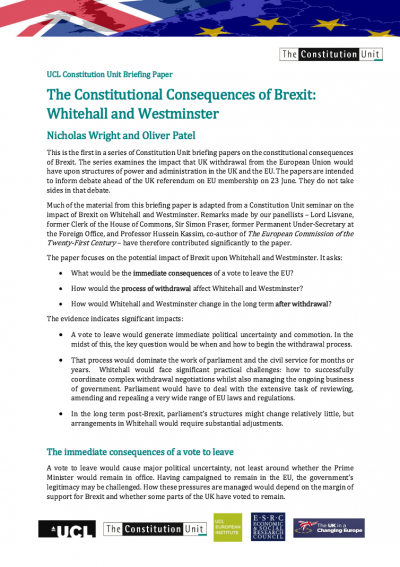 On 21 April, the Constitution Unit hosted its first Brexit seminar. Our panellists - Lord Lisvane, former Clerk of the House of Commons, Sir Simon Fraser, former Permanent Under-Secretary of the Foreign Office and Professor Hussein Kassim, author of The European Commission of the Twenty-First Century - discussed the impact that Brexit would have on Whitehall and Westminster.

This briefing paper, written by Nicholas Wright and Oliver Patel, explores this topic in further depth. Drawing on the seminar, it asks: what are the immediate political consequences of a vote to leave the EU? What would the withdrawal process entail and how would it impact on Parliament and the civil service? And, what would be the long-term impact of Brexit on Whitehall and Westminster? The evidence indicates that Brexit would have a significant impact on Whitehall and Westminster, especially during the withdrawal process.

The paper is part of a wider project for the UK and the EU. The project consists of a series of seminars, with each seminar followed by a briefing paper and video on the same topic. There are three more seminars and a major debate prior to the referendum, details of which can be found here.

The Unit also announces today the speakers for the UCL EU Referendum Debate: To Remain or To Leave? on Thursday 16 June, one week before the referendum.