New Book: Faces on the Ballot: The Personalization of Electoral Systems in Europe 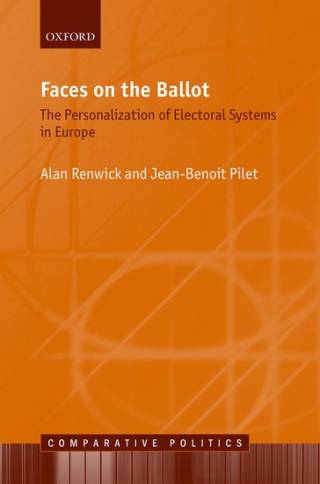 Oxford University Press today publishes a new book by Dr Alan Renwick (Deputy Director of the UCL Constitution Unit) and Professor Jean-Benoit Pilet (Head of the Centre for the Study of Politics at the Université libre de Bruxelles).

The book - Faces on the Ballot: The Personalization of Electoral Systems in Europe - takes the study of electoral systems into new territory. Attention has traditionally focused on the degree to which electoral systems are proportional or majoritarian - how far they spread power across parties or concentrate it in the hands of a few. As voters disengage from parties, however, we need to attend also to electoral system personalisation: how far voters can influence not just how many seats each party wins, but also who fills those seats. The book offers the most detailed examination to date of this issue.

The degree of personalisation has become controversial in many countries. In Great Britain, for example, there is widespread unhappiness with the 'closed-list' system used for elections to the European Parliament. Campaigners for electoral reform at Westminster also complain that first past the post denies ordinary voters the chance to choose among alternative candidates from the same party.

The book identifies a widespread shift towards more personalised electoral systems in Europe over the past quarter century. It explores the processes underpinning this shift and the degree to which the reforms adopted have affected politics more widely. It finds that personalising reforms have generally been enacted in response to voters' disaffection with politics. But there is little evidence that any of the changes passed to date have had any effect in countering that disaffection.