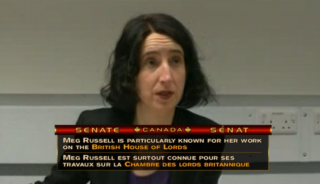 Senate reform is high on the Canadian political agenda, following the election of Prime Minister Justin Trudeau's Liberal government in October 2015. The Senate is a wholly appointed body, and Trudeau has proposed reform of appointments learning some lessons from the UK model - with 'independent' senators recommended to the Prime Minister by a new Advisory Board for Senate Appointments (see details here). This is explicitly quite similar to the UK House of Lords Appointments Commission, and will result in creation of a new group of independent senators in a body which has previously been dominated by the political parties. There may therefore also be things to learn from the Crossbenchers in the House of Lords.

Meg Russell, an expert on the British parliament and comparative bicameralism, spoke to the committee about the appointments process and operation of the Crossbenchers in the UK, and prospects for creation of a large group of independent senators in Canadian politics. She also addressed other questions of Senate reform, such as the possibility of introducing elections for committee chairs (as was introduced in the UK House of Commons in 2010). In her evidence, Meg Russell emphasised the positive contribution that independent Crossbench experts make to the House of Lords, but expressed some scepticism about the practicality of the new Canadian government's proposal that all senators in future should be nonpartisan.

The full video of her evidence can be seen here. A transcript will be available shortly.