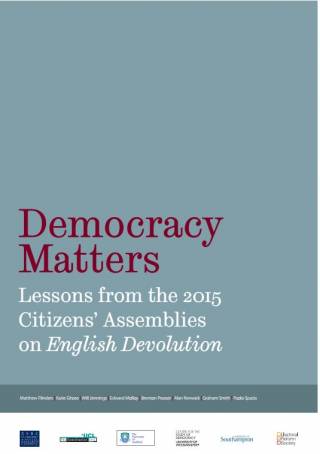 The final report of the Democracy Matters project, which ran the UK's first citizens' assemblies last autumn, is published today.

The project brought together two groups of around thirty randomly selected citizens - Assembly North, based in Sheffield, and Assembly South, based in Southampton - to consider how they wanted their local areas to be governed. Each assembly met over two weekends, first learning about the options, then hearing from advocates of a diverse range of perspectives, and finally deliberating in depth and reaching conclusions.

Funded by the Economic and Social Research Council (ESRC) and coordinated by a team that included Constitution Unit Deputy Director Dr Alan Renwick, the assemblies were designed with two purposes in mind. The first was to understand how well-informed members of the public respond to the government's current 'devolution deals' and the alternatives to them. The second was to examine how well the citizens' assembly model - which has previously been applied in Canada, the Netherlands, and Ireland - might work in the UK context.

The project found a strong desire, particularly in the Assembly North area, for greater devolution than is currently proposed and, in particular, for clearer lines of accountability to voters. It found that the citizens' assemblies worked very well: members deliberated very effectively and reached coherent, grounded conclusions; they showed great enthusiasm for taking part. The project also identified important lessons to learn for any future citizens' assembly, particularly around processes of member recruitment.

Dr Renwick, who was Academic Director of Assembly North, commented: "It is vital to develop ways through which citizens can engage thoughtfully and constructively in our democratic processes. Citizens' assemblies offer a very promising way of doing so. By running these pilots, we have learnt a great deal about how such assemblies should be run and what part they might play in our political system."