Order a copy of 'Special Advisers: Who they are, what they do and why they matter' 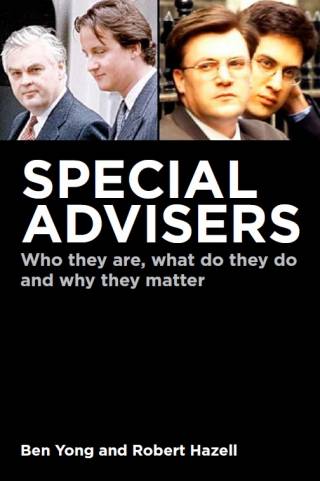 Viewers of The Thick of It will know of special advisers as spin doctors and political careerists. Several well-known ministers have been special advisers, among them David Cameron, Ed Miliband, Jack Straw and Vince Cable. People also know about the public relations disasters involving Jo Moore, Damian McBride and Adam Smith. But what is the reality? What do special advisers actually do in government? Who are they, where do they come from, and why are they needed?
This book is the most detailed study yet carried out of special advisers. The Constitution Unit's research team, led by Dr Ben Yong and Professor Robert Hazell, assembled a comprehensive database of over 600 special advisers since 1979. They conducted written surveys, and interviewed over 100 special advisers, ministers and officials from the past thirty years. They conclude that special advisers are now a permanent and indispensable part of Whitehall, but are still treated as transient and temporary. The book concludes with practical recommendations for increasing the effectiveness of special advisers through improvements to their recruitment, induction and training, support and supervision, and strengthening their accountability.