The Politics of Coalition: How the Conservative-Lib Dem Government Works 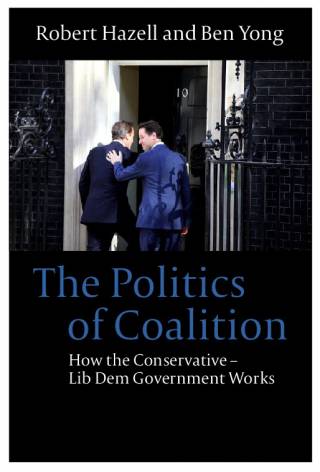 Hazell, R. and Yong, B. (July 2012, Hart Publishing) The Politics of Coalition: How the Conservative-Lib Dem Government Works

With the authorisation of Prime Minister David Cameron, Deputy Prime Minister Nick Clegg and the Cabinet Secretary, Sir Gus O'Donnell, Robert Hazell and Ben Yong have interviewed over 140 ministers, MPs, Lords, civil servants, party offi cials and interest groups about the coalition and what impact coalition government has had upon Westminster and Whitehall.

The Politics of Coalition tells how the Coalition has fared in the different arenas of the
British political system: at the Centre; within the Departments; in Parliament; in the parties outside Parliament, and in the media. It will be of interest to politicians, policy makers, academics, students and anyone interested in how the UK coalition works in practice and not just in theory.