What is a citizens' assembly? 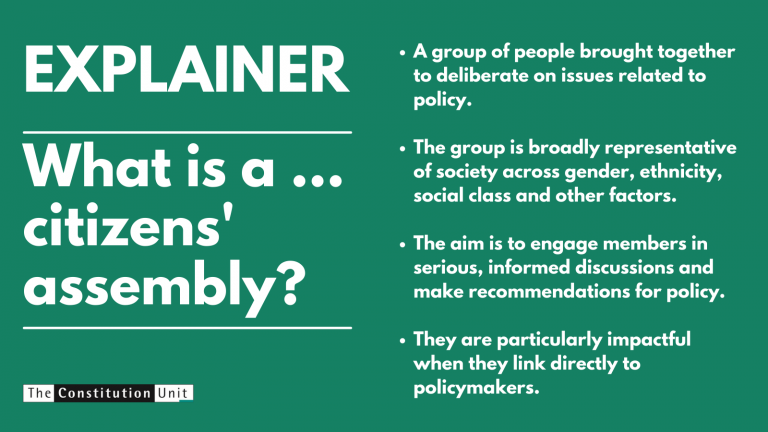 A citizens’ assembly is a group of members of the public brought together to deliberate on issues related to policy. They are deliberative democratic mechanisms designed to improve decision-making by allowing informed and considered public opinion to be heard on major policy questions.

Around the world, they have been held on issues such as electoral reforms, tackling climate change, and abortion law. They first took place in the early 2000s in parts of Canada – notably British Columbia and Ontario. They have become much more popular in recent years, in countries including Ireland, France, Germany, and Australia.

Members of the public are randomly selected to participate. Care is taken so that assembly members are broadly representative of society across characteristics such as their gender, ethnicity, social class and the area where they live. Many assemblies also take account of relevant political divides or policy views.

Unlike consultations or focus groups, the goal isn’t to just learn about what people already think. Rather, members engage in thoughtful conversations on important policy matters with people they may never normally meet, and hear from experts to inform their thinking. The end goal of an assembly is to make recommendations on the various options available.

In this video, Alan Renwick, research lead of the Citizens’ Assembly on Democracy in the UK, gives an overview of what the citizens’ assembly is, its role, what questions it will be tackling, and what to expect from the six weekends of the Assembly.

Citizens’ Assemblies are particularly impactful when they are linked to policy priorities, and there is a high level of political investment. For example, the Climate Assembly UK was commissioned by six select committees of the House of Commons to understand public preferences on how the UK should meet its target to reduce greenhouse gas emissions to net zero by 2050. Published in September 2020, the Climate Assembly’s report, ‘The path to net zero’ set out recommendations across eight policy areas, some of which have been reflected in government policy. For example, bringing forward the ban on the sale of new petrol and diesel cars and increasing capacity for renewable energy.