Heads of Department over the years

The initial nucleus of computer scientists came from the University of London Institute of Computer Science, which was renowned for its established MSc programme and its research. A generous grant from IBM financed a professor and a lecturer.

In 1980, the independent Department of Computer Science was formed with Professor Peter Kirstein as its first Head. At that time there were 7 academic staff (including 3 professors) and one substantial research area: computer networks and data communications. In 1985, we began offering a specialist MSc in Data Communications, Networks and Distributed System, now known as Networked Computer Systems.

Changing the world through research

We are also partners in a number of research centres, including the Centre for Medical Image Computing, the Bloomsbury Centre for Bioinformatics, the UCL Interaction Centre, London Software Systems, UCL Adastral Park, and the Centre for Computational Statistics and Machine Learning. In August 2010, we welcomed new colleagues joining the department from CREST and a new PPLV Research Group in the spring 2012. 2013 saw several exciting developments, including the establishment of a joint UCL/BBC London Media Technology Campus at 1 Euston Square, and another period of growth in our academic staff. In 2016, we were very pleased to welcome CoMPLEX (UCL Centre for Computation, Mathematics and Physics in the Life Sciences and Experimental Biology) to join Computer Science and we look forward to building on our long and fruitful relationship.

The department's results in Research Assessment Exercises (RAE) and Research Excellence Framework (REF), have been particularly strong. In the RAE 2009, the panel commended our "visionary strategy and sustainability". We were particularly pleased because 100% of our academic staff were submitted - 55 individuals - among the largest research submissions in computer science - and demonstrating collective research power as well as excellence. 80% of the department's research submission was assessed as 'world-leading' or 'internationally excellent' in terms of originality, significance and rigour.

At the end of 2014, we finally received the results of the latest Research Excellence Framework. The department was submitted as part of the Computing and Informatics Unit of Assessment (UoA11), with Professor Mark Harman's expert and tireless work as Academic Lead for the submission. We were absolutely delighted with the results, which placed us first overall in the UK for Computer Science and Informatics.

Our dedication to education

The department has always had a strong commitment to the teaching of Computer Science at undergraduate level and has steadily developed a range of degree programmes and course units. The programmes are regularly reviewed to take account of developments in the discipline itself, developments in teaching methods and changing requirements to prepare students for their future career in industry, commerce, research and education. As a result of a review in the late 1990s, we introduced four-year undergraduate programmes (MSci, later renamed MEng) which was an important and exciting development because a four-year degree allows more opportunities for an in-depth treatment of advanced topics, including courses offered to MSc students. Undergraduate teaching has undergone an impressive transformation, with students learning via problem-based and project-based methods (e.g. robotics programming).

Our portfolio of taught programmes has also developed in line with the department's growth.  Our postgraduate teaching has always included the MSc in Computer Science and this was augmented in the early 1980s with the MSc in Information Technology (run jointly with the Department of Electronic and Electrical Engineering until 2002/03). Both the MSc Computer Science and the MSc Information Technology are what we now call 'generalist' programmes: the students who are admitted to them come from a variety of non-Computer Science backgrounds. Over the years, the department has changed programme names and added new exciting programmes. There are currently 12 postgraduate taught programmes and over 10 postgraduate research programmes.

Apart from courses for students on our programmes, we have always had a good portfolio of offerings made available to the wider UCL community.  Such courses have over the years included Introductory Computer Science, Electronic Commerce, Digital Business, Introduction to Business and Entrepreneurship, and Financial Computing.

How we've been growing

Here's a quick look at how we've expanded over the years.

UCL computer science was officially 30 years old on the 1st of January 2010, the date when the Department of Statistics and Computer Science separated. We had a Departmental photograph taken on the 20th of April and had a splendid dinner party at the Russell Hotel in the summer.

We celebrated our 35th birthday with another party!

2016 began with the fantastic news that Sue Black, Honorary Professor, was awarded an OBE in the New Year Honours list. Then, Anthony Finkelstein was appointed CBE in the 2016 Birthday Honours for services to computer science and engineering.

We are planning a virtual celebration to take place in spring 2021. Watch this space.

To find contact details for a specific member of staff, visit our People pages

How to Find Us

Further details on our sites and how to get there 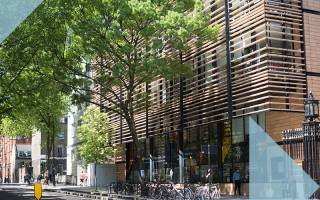 The Department of Computer Science is part of UCL Engineering, an exciting UCL faculty comprising 10 cutting-edge departments.  Visit the UCL Engineering website to find out more.