Following his PhD at Montpellier University, France, Benoit carried out postdoctoral studies in David Stokoe’s lab at the UCSF Cancer Institute, San Francisco, USA, where he studied the role of the PI3K/TSC/mTOR pathway and mRNA translation in cancer. In 2007, Benoit joined the Cell Signalling group as a senior postdoctoral fellow and is currently investigating the role of class III PI3K.

Sarah completed her Bachelor of Biomedical Sciences (Hons) at Monash University, Melbourne, Australia. She joined Prof. Christina Mitchell's lab at Monash University where she obtained her PhD working on an inositol polyphosphate 5-phosphatase. In 2019, she moved to the Cell Signalling lab to study the biology of oncogenic class I PI3K alpha and will be supported by a Marie Sklodowska-Curie fellowship.

Grace completed her BSc Hon degree majoring in Biomedical Science at the University of Auckland. She then worked with Dr. Jack Flanagan, Prof. Peter Shepherd and Dr. Christina Buchanan at the University of Auckland for her PhD majoring in PI3Kalpha drug discovery. Following her PhD in 2017 she worked with Prof. Ming-Wei Wang in the Shanghai Institute of Materia Medica, Chinese Academy of Sciences for six months on PI3K and SGK drug discovery before joining the cell signalling lab in 2018 to work on PI3K modulators.

Elena completed her undergraduate training in Biology and Molecular Biomedicine at the Universidad Autonoma de Madrid, Spain. She then obtained her PhD at the Spanish National Cancer Research Centre (CNIO), Madrid, in the lab of Dr Manuel Serrano. In 2016, she joined the Cell Signalling Group as a Postdoctoral Fellow where she is studying oncogenic PI3K alpha in disease.

Ralitsa Madsen, PhD - The systems biology of PI3KAlpha signalling in health and disease

Ralitsa completed her undergraduate degree in Molecular Biomedicine at the University of Copenhagen (2010-2013), followed by an MPhil in Medical Science at the Institute of Metabolic Science (IMS), University of Cambridge from 2013-2014. Supported by a 4-year Wellcome Trust PhD Studentship, she then completed a combined MRes/PhD in Metabolic and Cardiovascular Disease in Prof Robert Semple’s group at the IMS in Cambridge (2014-2018), and moved to the University of Edinburgh to complete a short-term postdoc in his new group at the Centre for Cardiovascular Science (CSV). During her work with Prof Semple’s, Ralitsa established human developmental models of oncogenic PI3Kalpha activation. She joined the Cell Signalling group in September 2019 to start a systems biology project on PI3Kalpha signalling in health and disease.

Priyanka did her BSc in Biotechnology and MSc in Microbial Gene Technology in India, followed by a PhD with Prof Pete Downes and Dr Nick Leslie at the University of Dundee studying Akt-independent mechanisms of tumour suppression by PTEN. For her post-doctoral research, Priyanka worked with Nick Leslie at Heriot Watt University, Edinburgh, studying  tumourigenesis in transgenic PTEN mice models . She then joined the Lab of Prof Markus Muschen at the University of Cambridge where she worked on the role of PTEN and PI3K in acute leukemias. She then briefly worked with Dr Elisa Laurenti at the University of Cambridge studying the role of inflammatory cytokines in haematopoietic stem cell function. Priyanka joined the Cell Signalling group in January 2017 to work on therapeutic intervention for PTEN Hamartoma Tumour Syndrome (PHTS).

Evelyn completed an MRes degree in Tissue Engineering for Regenerative Medicine at the University of Manchester. Prior to that, she worked as a Transplant Coordinator and Laboratory Officer in Singapore. After completing her Masters, she then joined Professor Julian Knight group as a Research Assistant at Wellcome Trust Centre for Human Genetics, University of Oxford and was involved in various projects, focusing on defining regulatory variants that are associated with susceptibility to autoimmune diseases using functional genomic approaches. She was awarded a Ong Sek Pek-UCL Cancer Institute Research Trust PhD studentship in 2016 and joined the Cell Signalling group to work towards her PhD, focusing on the genomic impact of oncogenic PIK3CA mutation. Evelyn now works as a Research Fellow in the lab.

Victoria is a Histopathology Specialist Trainee who gained her medical degree from Leicester University and an intercalated BSc in Haematology from Imperial College London. After graduating from medical school she obtained an Academic Foundation Programme post and spent her research time at UCL in Professor Flanagan’s lab, working on the development of a diagnostic test for H3F3A p.Gly34Try mutations in Giant Cell Tumours of Bone. Following foundation training she spent a further year in the same lab investigating circulating tumour DNA in chondrosarcoma and other bone tumours. She currently holds an Academic Clinical Fellowship and has been with the cell signalling group since June 2018, to focus on characterising mouse models of PTEN hamartoma syndrome. Victoria started her Clinical PhD studentship in April 2019 funded by Jean Shanks and the Pathological Society on the histological and molecular characteristics of PTEN-driven tumours.

Georgia completed a BSc in Biomedical Sciences and later an MSc in Cancer at University College London. During that time she gained experience in a number of laboratories including the Vanhaesebroeck lab where she carried out her MSc research project which involved a screen of possible therapeutics for PTEN Harmatoma Tumour Syndrome (PHTS). After finishing her MSc, Georgia continued to, on a voluntary basis, work alongside Priyanka to work on a therapeutic intervention for PHTS. She officially joined the Cell Signalling group in January 2018, to investigate the effects of various drugs on the PI3K/Akt signalling pathway. Georgia started her CRUK-UCL Centre funded non-clinical PhD studentship in September 2019.

Sara obtained the International Student Scholarship to complete her BSc in Pharmacy and Pharmaceutical Sciences (King Saud University, Riyadh) during which she worked on the formulation of nanocapsules for breast cancer dual therapy. Following that she did her MRes in Drug Design at UCL (2019-2020) and conducted two masters’ projects at the Centre for Inflammation and Tissue Repair on which she worked on the expression and purification of the recombinant protein PNPLA3 while also analysing problematic crystallographic datasets. Sara started her Marie Curie fellowship in October 2021 on understanding the role of activated PI3Kδ mutations in cancer with special interest in novel ways to modulate PI3Kdelta activity.

Fiona completed her BSc in Biological Sciences at Cardiff University in 2021. As part of her degree she undertook a Professional Training Year, for which she joined Dr Clare Davies’s lab at the University of Birmingham, which investigates the role of PRMT-catalysed post-translational arginine methylation in cancer. Fiona’s project focused on the RNA regulatory protein FXR1, a PRMT substrate, and its potential role in the regulation of DNA repair. Fiona joined the Cell Signalling group in October 2021 to complete her CRUK-funded PhD, focussing on growing organoids in which to answer questions about the early development of PTEN-mutant lesions.

Alberto completed his BSc in Biotechnology (UPV, València), 2019. During that time, he worked in Dr. Rosa Farras’ oncogenic signaling lab (CIPF, València). For his BSc thesis he conducted a pilot study with a novel pH dependent drug in tumoroshperes which was granted with honours. Then he enrolled in the MSc ‘Genes, Drugs & Stem Cells’ at Imperial College London and for his MSc thesis he joined Dr. George Poulogiannis’ lab (ICR, London) where the metabolic implications of PIK3CA in cancer gained special interest. The COVID-19 pandemic modified it into a systematic review of literature, obtained with distinction. In 2021 he joined the Cell Signalling group to continue research on PIK3CA signalling

Daniele worked at the Centre of Biotechnology of Cardarelli Hospital in Naples, Italy, first as Junior Researcher and later as Research Assistant, focusing mainly on the investigation of the role of HO-1 in the ischaemia/reperfusion process in liver transplantation. He moved to Queen Mary University of London to specialize in animal models and animal management, and joined the Cell Signalling group to work on projects involving class III PI3K signalling.

Alex completed her PhD in Biochemistry at the University of Southampton. She then joined Prof Clare Isacke’s group at Imperial College as a postdoctoral researcher, and moved to the Ludwig Institute for Cancer Research (at St. Mary’s, and subsequently at UCL) as a Research Assistant and Assistant Laboratory Manager. She joined the Cell Signalling group in 2007 as Laboratory Manager. Since the team’s relocation to UCL, Alex continued in this role, in addition to her position as Cancer Research UK – UCL Centre Manager from 2014 to 2017. Alex is now the Research and Laboratory Manager for the Cell Signalling group.

Mahreen completed a BSc in Neuroscience, followed by an MSc in Drug Discovery Skills at King's College London. During her Masters, she carried out a research project at AstraZeneca, investigating the role of exome-mediated delivery of genetic kill-switches for virus based gene therapies. 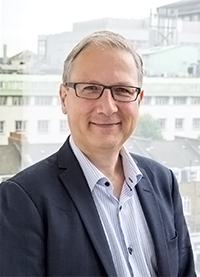