Variation in DNA methylation has been associated with predisposition, progression and response to treatment of a broad range of clinical conditions such as cancer and autoimmune diseases (Feinberg A.P. (2007), Nature 447, 433-440). The aim of this project is to develop novel experimental and computational methods for the analysis of 5-methyl-cytosine (5-mC) and 5-hydoxymethyl-cytosine (5-hmC) using both genome-wide and targeted approaches.

A number of techniques for generating whole-methylome datasets are available. The gold standard is Whole Genome Bisulfite Sequencing (WGBS), in which the methylated status of every cytosine in the genome can be resolved at single base pair resolution. Despite this benefit though, WGBS is time consuming, costly and (currently at least) inefficient, with 70-80% of sequencing reads providing little to no information (Ziller M. et al (2013) Nature 500, 477-481). One lower-cost alternative is Methylated DNA Immunoprecipitation (MeDIP), which involves co-incubation of DNA with an antibody raised against 5-mC along with magnetic beads, which form bead-antibody-methylated DNA complexes. These complexes are then separated from the unmethylated fraction and when coupled with next generation sequencing can assess more 50% of methylated CpG dinucleotides at 150- to 200-bp resolution, concomitant with sequence inset size.

Several techniques have been established to map DNA methylation in single CpG resolution at a selected subset of genomic regions of interest, for example to validate signals from epigenome-wide association studies (see: EWAS project page). Such methods include pyrosequencing, Sanger sequencing and high-resolution melting curve analysis. However, most of these have not been optimised for high-throughput applications. Emerging techniques that utilise next-generation DNA sequencing platforms are particularly promising for the large-scale, targeted bisulphite sequencing of genomic regions of interest. 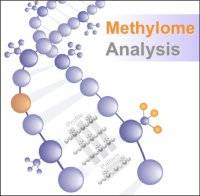