An understanding of gene control during development has opened the door to a possible new treatment for chordoma – and potentially other cancers. 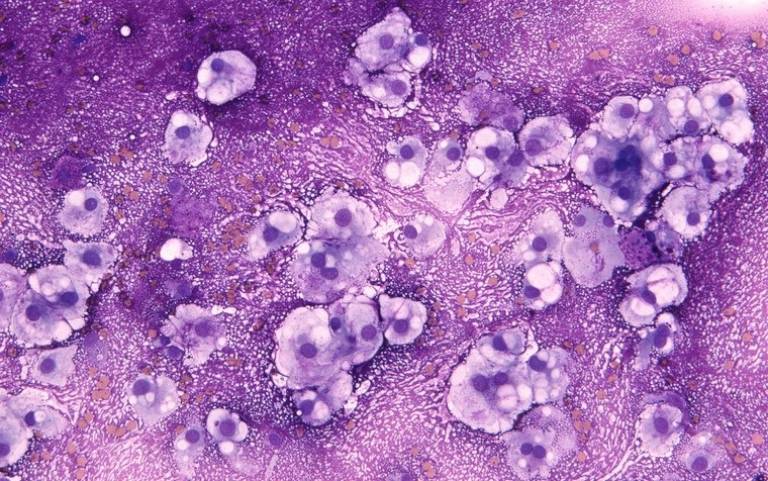 Chordoma is a rare bone cancer, generally affecting the bones in the base of the skull and spine, with few treatment options and poor prognosis. Average survival time after diagnosis is just seven years.

Genetic analyses have revealed that chordomas are characterised by expression of a gene called TBXT (also known as brachyury). Normally, TBXT is expressed only during a brief window in human development, when it helps to create an early forerunner of the skeleton known as the notochord. After 12 weeks, by which time TBXT has completed its biological task, the gene is switched off for good.

If TBXT becomes reactivated in later life, it can contribute to uncontrolled growth of cells and the development of cancer.

TBXT is silenced by an ‘epigenetic’ mechanism – chemical modification of DNA and the proteins it wraps around (histones), which causes DNA to scrunch up into a highly compact configuration. Particular enzymes are responsible for making these modifications, and for reversing them. Lucia Cottone and colleagues from the UCL Cancer Institute, University of Oxford and Structural Genomics Consortium reasoned that targeting these enzymes might provide a way to silence TBXT when it is inappropriately activated.

Using a range of chordoma cell lines and multiple compounds known to interfere with DNA and histone modification, Cottone et al. found that compounds targeting two related enzymes, known as KDM6A and KDM6B, caused the chordoma cells to die off. A similar effect was seen when the genes for the two enzymes were knocked out.

“By screening more than 90 chemical probes targeting the epigenetic machinery, we have been able to identify a compound that switches off the TBXT gene and kills chordoma cells,” said Dr Lucia Cottone, Research Fellow and lead author of the study.

The findings suggest that targeting KDM6A and KDM6B could be a route to explore to provide new treatment options for chordoma, a cancer for which survival rates have barely improved for decades. Furthermore, TBXT is also inappropriately expressed in a range of other tumour types – suggesting that targeting the epigenetic machinery regulating TBXT could also be an option for a wider range of more common cancers.