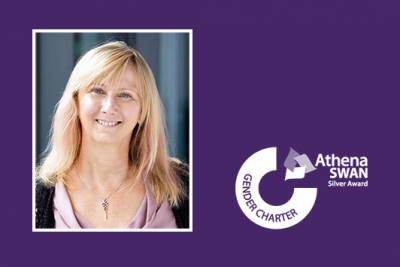 Why did you become a haematologist?
I wanted to work in psychology. The sole reason I agreed to apply to medical school when encouraged by my teachers, was to become a psychiatrist. I had no particular interest in learning about or treating physical illness, because I was - and remain - rather squeamish. So, I prepared for psychiatry by taking an intercalated BSc in psychology during medical school. However, during the clinical training years, I could clearly see that the clinical practice of psychiatry did not conform to the lofty and possibly ridiculous ideas I had developed from reading RD Laing in Rochdale library as a sixth former. On the other hand, my clinical attachment to haematology fulfilled a lot of my daydreams of how I might enjoy working with and helping people in extremely psychologically challenging situations. I loved the atmosphere within the clinical team I was attached to and really enjoyed seeing the lasting relationships they made with patients.

I was also poor at anatomy – part of my excuse is extreme left-right confusion – so it was a relief that blood was just sort of everywhere and not in a specific place underneath and behind something that I would struggle to describe to an examiner. So, I began to imagine I might pass exams in this type of subject without hating having to study for them. Ultimately, I became interested in the science behind my clinical work. I share this rather roundabout story because there is a tendency to write off people who are not fully committed to academic endeavours in a specific discipline by the end of nursery school as somehow not serious. Getting from a to b in your career requires not only knowing what you want to do but also genuinely believing it is possible. If you are not the sort of person who sees yourself as a professor of something when you are still in medical school it may be because you’re still processing the fact that you even got to medical school in the first place! Take your time, it’s a marathon, not a sprint.

Did you face any challenges in your career attributable to being a woman? If so, how did you overcome these challenges?
I wouldn’t say that I was blind to certain issues that women commonly face that men rarely experience, however, because of the person I am, I tended to deal with these issues head-on, when they occurred. If you treated me inappropriately, I likely made you aware at the time and you’re still benefitting from a lifetime of my disrespect. However, I have an aggressive, somewhat “masculine” persona and often instinctively dealt with such issues promptly. I realise that women react in a large variety of ways to inappropriate behaviours. It is only the behaviours that are wrong, never the reactions of those experiencing them. Only more recently have I placed the numerous comments from male colleagues that I have received over the years (‘feisty’, ‘trenchant’, ‘breath of fresh air’) as the sort of things commonly intended to make women feel uncomfortable for being somehow ‘unladylike’. I didn’t and don’t struggle with these sorts of perceptions, because I genuinely don’t care. They reveal much more about the person who said them than they do about me. I am aware of having been underestimated and I am certain that still happens. It can be highly entertaining, not being seen as viable competition.

The theme for this years’ International Day of Women & Girls in Science is ‘'Investment in Women and Girls in Science for Inclusive Green Growth’. The day focuses on the reality that science and gender equality are both vital for the achievement of internationally agreed development goals. What do you think needs to be done to achieve this progress for women and girls in Science?
In the UCL Cancer Institute, we have generated the slogan “Excellence needs Everyone” to summarise why we care about promoting women in science. It’s not to fulfil some kind of quota or be ‘politically correct’ but to remind ourselves that to achieve the best outcomes in science (and other disciplines) we need to use all of the different ways in which people think and work. However, I recognise a societal danger in continually re-stating the blindingly obvious – that women are as capable as men. But without getting on with it and making it real, people can grow weary of the message and forget that it’s basically common sense to use everyone’s talent, regardless of their gender, ethnicity or social background. You wouldn’t want me on your team because I’m a woman, you’d want me on your team because I’m a hard-working, decent and capable human being. However, if you want someone to have a baby, that’s – broadly speaking - something that only a woman can do, at present - we don’t need to be glamourised or celebrated for that in the workplace, we just need to be not penalised. And at the moment, we still are. So, to my mind, we need an attitude change from the type of thing you mentioned being seen as being ‘worthy’ to simply being right and necessary. From my psychology days, I understand how hard attitude change can be to bring about and I worry that our current messaging strategy about gender equality is not working because it’s still seen as something ‘nice to do’ for women rather than something vital to achieving for society.

How important is it for women to lift each other up and what does that mean to you?
Without my female friends and colleagues, I would be nowhere on both a personal and a work-related level. I feel grateful and blessed to have enduring female friendships, formed in the heat of the workplace battle, as it were. I find that women getting together to discuss work in informal situations like bars and restaurants are often perceived as being nice things that the ladies do together after work, of minor consequence but they are actually every bit as consequential and lofty as the meetings men have historically had in bars and clubs to thrash out things like who’s going to be head of this and that. The difference is that many women don’t see their interactions with each other as vital networking. It can sometimes be hard to persuade female colleagues that having dinner to talk about a workplace political situation at work or a job opportunity is something that may legitimately compete for attention with all their other responsibilities, including, sometimes the domestic. Ladies come dine with me!

What would your advice be to young women thinking about a career in research &/or Haematology?
Find a partner who can cook. And don’t feel grateful that you are being ‘allowed’ to work/travel/not be home for bedtime. Stop it. It’s not a concession that someone else must make for you to do your thing.