At the Glynn Laboratory of Bioenergetics, we use of UV/visible and vibrational infrared spectroscopies, together with a wide range of biophysical and biochemical methods, applying them to our two main areas of research of electron/proton transfer structures and mechanisms of respiratory chain enzymes and development of novel clinical diagnostic tests. 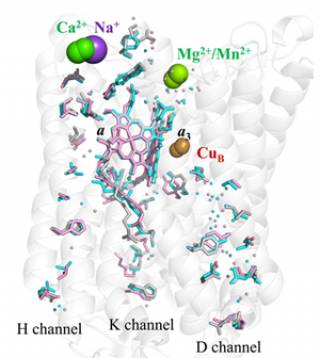 Our basic research focuses on biological electron and proton transfer processes in electron transfer chain, particularly those of the respiratory chain. Major techniques are vibrational infrared (IR) and UV/visible spectroscopies, together with a wide range of other biophysical and biochemical methods. Particular areas of experimental interest are cytochrome c oxidase and related enzymes such as peroxidases. Structure of bovine complex IV (subunits I and II) and its prosthetic groups (taken from Rich, P.R. and  Maréchal, A. (2010) The mitochondrial respiratory chain. Essays in Biochemistry, 47, 1-23. Cytochrome c oxidase (CcO) is a mitochondrial membrane protein that catalyses the reduction of oxygen to water with electrons from ferrocytochrome c in the intermembrane space and four protons from the mitochondrial matrix.  The reaction is coupled to the translocation of four additional protons across the inner mitochondrial membrane.  These reactions generate a protonmotive force which is used to drive endergonic processes such as ATP synthesis.  The oxygen reduction reaction itself takes place in a binuclear centre that is composed of haem a3 and CuB and protons are moved through hydrophilic channels in the protein structure. 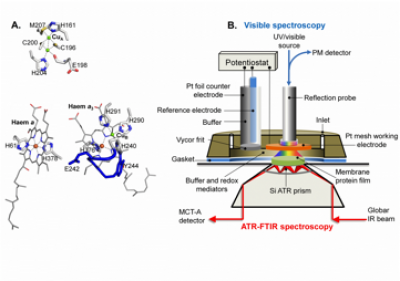 CcO metals centres and their ligands and electrochemical ATR-FTIR/UV-visible sample cell (taken from Dodia, R. et al. (2013) IR signatures of the metal centres of bovine cytochrome c oxidase: assignments and redox-linkage. Biochemical Society Transactions, 41, 5, 1242-1248). Functionally significant redox-linked structural changes of cytochrome c oxidase can be studied using electrochemistry coupled ATR-FTIR spectroscopy as shown above.  The electrochemical cell is designed to also facilitate in situ UV/visible spectroscopy measurements for monitoring the reaction and the stability of the sample.  In addition to the example shown above, we have developed devices that allow diverse reactions to be induced using perfusion/dialysis methods that allow introduction and removal of reactants, such as ligands, metal ions, redox mediators. 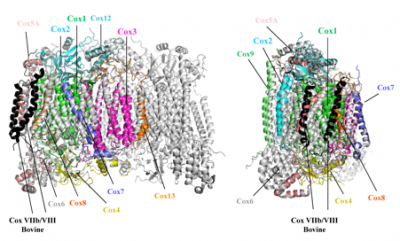 Superposition of homology models of the 11 subunits of yeast CcO on the dimeric bovine CcO structure (taken from Maréchal, A. et al. (2012) Yeast cytochrome c oxidase: A model system to study mitochondrial forms of the haem-copper oxidase superfamily. Biochimica et Biophysica Acta, 1817 (4), 620-8).  Mitochondrial cytochrome c  oxidase is a large multimeric protein composed of 13 (bovine) or 11 (yeast) different subunits. Three of these subunits are encoded by the mitochondrial genome and the remainder by the nuclear genome. Bacterial homologues are simpler, with a functional core composed of the same three subunits that are mitochondrially-encoded in eukaryotes.  A structural model of yeast cytochrome c oxidase is shown in colour that was predicted by homology modelling with the known bovine cytochrome c oxidase structure (which is dimeric in the crystal form) shown in grey.  The yeast cytochrome c oxidase is a good model system to investigate the coupling of proton and electron transfer processes, as well as the role of the possible proton translocation pathways, since we are able to generate mutant forms of this enzyme. 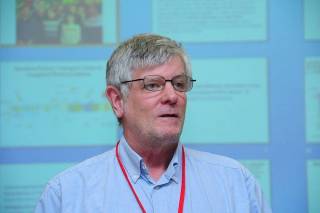 Since 2021, the laboratory and its main activities have been run by Dr. Amandine Marechal.